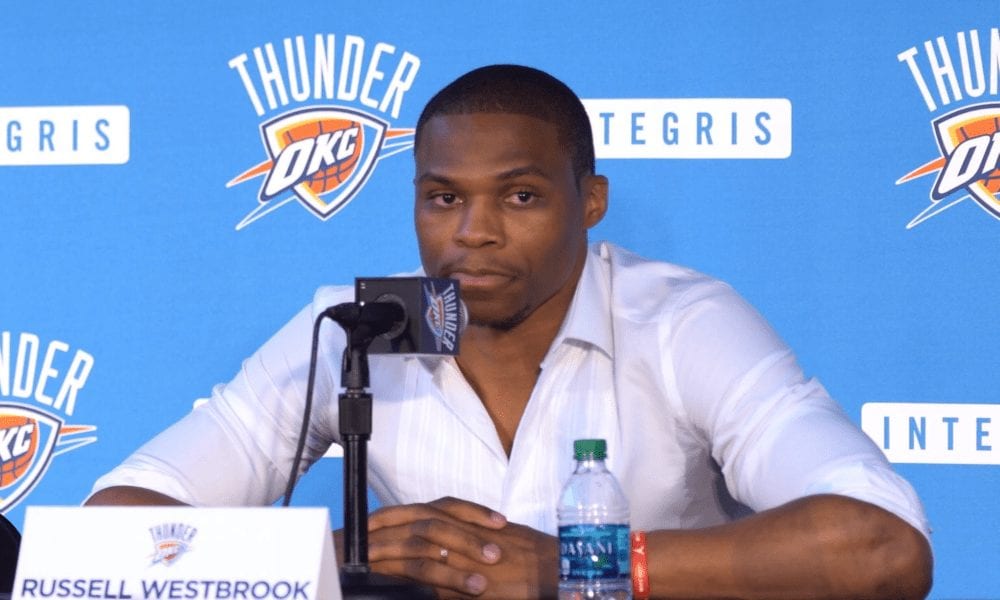 Russell Westbrook made headlines earlier this month when he forced a reporter to answer his own question.

The exchange was light-hearted, good-natured and genuinely funny.

But that fleeting moment – and most Westbrook media sessions are fleeting – was the exception to rule.

Most days, watching Westbrook interact with the media is like watching an entitled child kick up a stink for sake of it.

He’s prone to offering just two or three words at a time, turning the question back on whoever asked it, taking swipes at the journalist in question, and of course, insisting the reporter answer his or her own question.

He tried the latter technique again on Saturday, as the manoeuvre rapidly became one of his favourites.

Only this time, it wasn’t funny.

Westbrook doesn’t want journalists to ask about topics they don’t know everything about – despite that being precisely the point of asking questions – but also thinks it’s pointless for them to ask about an incident they do know something about?

You can’t have it both ways, Russ.

Clearly Westbrook was particularly infuriated on this occasion – what with the NBA’s greatest ever hitman on his case that night –  and all logic went right out the window, along with his general human decency.

But this isn’t an isolated incident.

He treats the media the same way on a regular basis, and while sports journalism has its bad eggs, tarring every reporter with the same brush is as ridiculous as it is unjust.

Gregg Popovich does the same thing when he slaps down perfectly sensible questions from even the most respected analysts.

But that’s a story for another day.

When it comes to Westbrook, you may well be wondering why I’ve whipped myself into such a frenzy over all this.

But here’s the thing.

Westbrook’s behaviour bothers me so much because I love sports journalism, and he’s showing the profession and those who practice it the utmost disrespect.

Covering sports is an absolute joy and that’s the way it should be.

But it’s different when Russ is involved.

And that’s a damn shame.

While I’ve never been among the media members gathered around him at practice or after a game, perhaps one day I’ll catch him in person.

Maybe then I’ll understand why he’s so upset with the media world.

If you ask me, it’s the media world which should be upset with him.