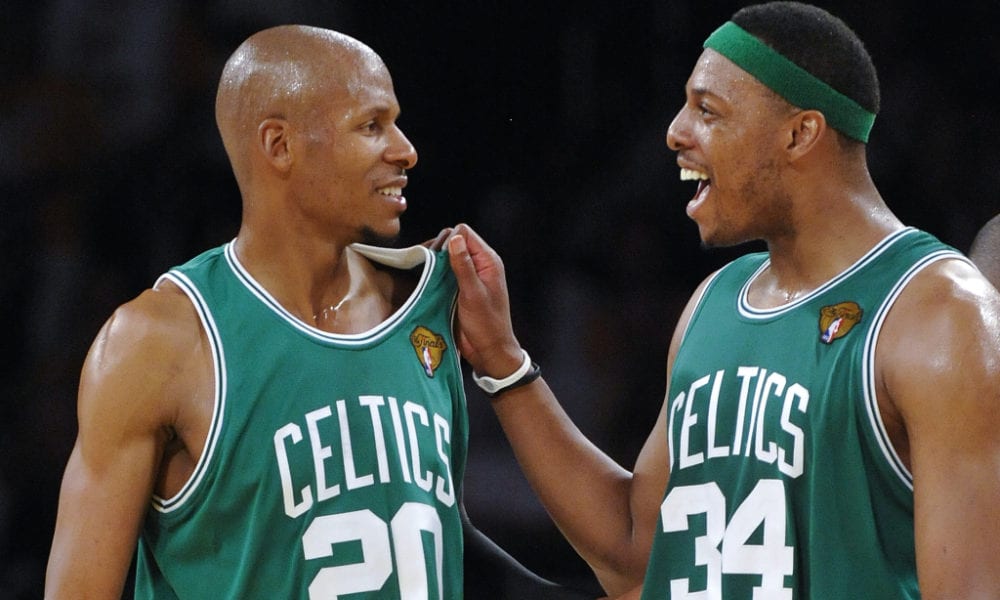 As Rajon Rondo, Kevin Garnett and Doc Rivers got together at TD Garden for Paul Pierce’s jersey retirement on Sunday, fellow Boston champion Ray Allen was a notable absentee.

Allen, it turns out, was on the golf course instead (where else?).

It was vaguely reminiscent of the still-bitter Chris Webber opting against watching Michigan play in the 2013 National Championship game with his former Fab Five teammates.

But now Allen has congratulated Pierce over Instagram, a full two days after the ceremony.

What we did in 2008 was special! Not only by Boston standards but by professional sports standards. The truth is, without any one of us on that team we would’ve never been able to do the unthinkable. Going from last place in one year to winning a championship is unfathomable. But, we did it! WE did it- Paul Pierce, Kevin Garnett, Rajon Rondo, Tony Allen, P.J. Brown, Sam Cassell, Glen Davis, Eddie House, Kendrick Perkins, Scott Pollard, James Posey, Leon Powe, Gabe Pruitt, Brian Scalabrine, Doc, Danny, everyone at the Celtics Organization, our wives, children, families, the Fans in The City of Boston and yes, me. Over the last few years I have been berated, lambasted and had my name smeared. You may not want to hear this, but I will always be a Celtic. (Fact). I will always cherish the bonds that I shared with all of my teammates and the people in the city of Boston. (Truth). We all gave everything we had. We all won and we all raised the 2008 NBA Championship banner together. (Ubuntu) Paul Pierce is the first guy that welcomed Kevin and me with open arms into his atmosphere from day one and we never looked back. Paul and I have spoken about our time together as teammates- going to battle night after night knowing we could count on one another and we have also talked about my decision to leave during free agency- a choice I made for my family. Despite what you may have heard or read or what is rumored- there is nothing but love. Paul and I are more interested in building bridges than putting up walls. To Paul, number 34, Congratulations on having your number raised up to the rafters. I salute you for your commitment to the city of Boston and to us the 2008 NBA Champions #thetruth

“What we did in 2008 was special!,” Allen said in the post. “Not only by Boston standards but by professional sports standards. The truth is, without any one of us on that team we would’ve never been able to do the unthinkable. Going from last place in one year to winning a championship is unfathomable…”

While it’s certainly better than nothing, Allen’s 48-hour late post from a remote golfing location is a bit like skipping someone’s birthday and sending them an eCard instead.

For those who don’t recall the events of 2012, Allen was shut out by his then Boston teammates the moment he left for the rival Miami Heat.

He moved the summer after the Heat beat the Celtics in game seven of the 2012 Eastern Conference Finals, a move which has quite a Kevin Durant-ish vibe about it.

But his relationship with his fellow Boston stars had long been tumultuous even before his departure.