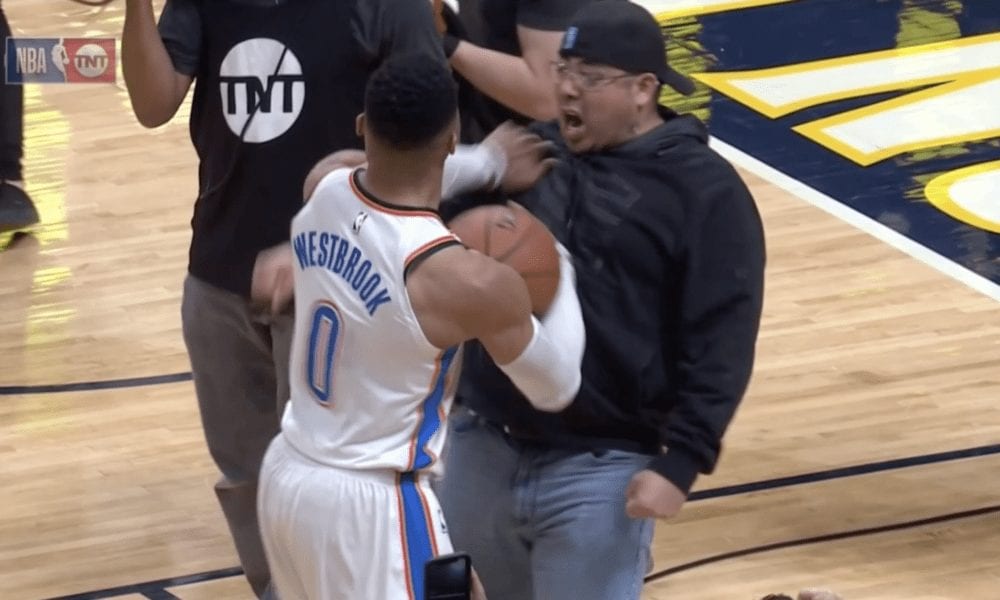 The NBA has decided against disciplining Russell Westbrook for shoving a fan in the aftermath of a wild game in Denver on Thursday night.

In the dying moments of the Thunder’s 127-124 buzzer-beating loss to the Nuggets, Westbrook found himself face-to-face with the screaming fan, who had made his way onto the court.

The Thunder star shoved him in the shoulder before a referee and an arena employee intervened.

Arena security swiftly removed the fan, while law enforcement issued a summons and complaint for trespass and the fan was banned from games, according to ESPN.

The NBA investigated the incident but deemed there was “no aggression or engagement” on Westbrook’s behalf.

“We can confirm that the Denver Police Department was involved as well as arena security officials,” the Nuggets said in a statement. “The matter has been passed on to the NBA and they will be investigating the incident further and handling the matter internally.”

It’s not the first time a fan has stepped onto the court in Denver either.

Who could forget the woman who strolled onto the court during the Nuggets’ 2012 playoff series against the Lakers?

The late, great Craig Sager later reported the woman had a history with the Nuggets, having been found stalking players and subsequently finding herself banned from the arena, before somehow sneaking in again.

Just recently, we saw a fan sneak onto the court pregame to warm up with the New Orleans Pelicans in admittedly hilarious fashion.

Then there was Utah’s Rodney Hood slapping a fan’s phone out of his hand while exiting the court following an ejection last month, an action which attracted all sorts of social media attention and a crisp $35,000 fine.

While the previous two incidents provided most fans with a hearty chuckle, the league will certainly be hoping the Westbrook incident marks the last time the invisible barrier between the players and the fans is crossed this season.