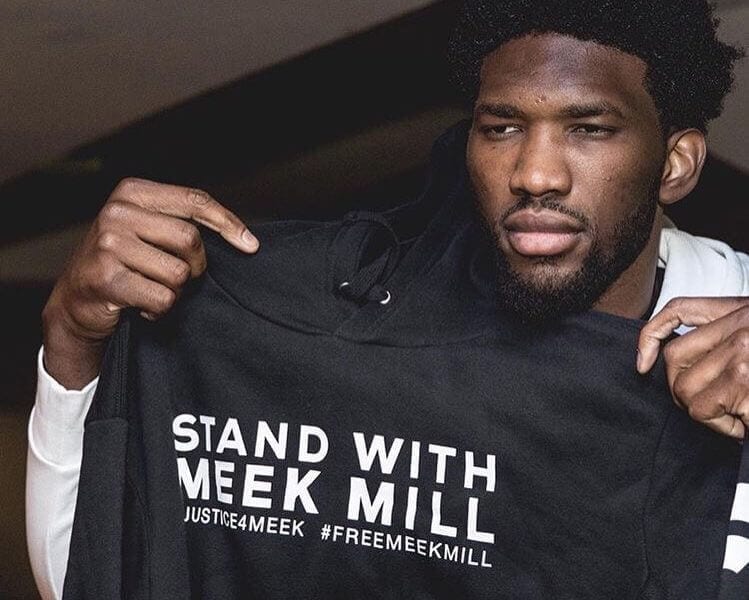 Embiid visited Mill —a 30-year-old Philadelphia native —in prison on Friday to show his support.

Here's Embiid on visiting @MeekMill in prison and showing his support: pic.twitter.com/J959UCtqXe

Mill has received an outpouring of support from fans, athletes and celebrities since being sentenced to two to four years in prison on November 6 for violating his parole with arrests stemming from a St. Louis airport fight and reckless driving in New York City.

Roughly 2.2 million people are incarcerated in the United States, an increase of 1.9 million since 1972. America professes to be the land of the free, yet it has the world’s largest prison population – with one-quarter of the globes prisoners, and just 5% of the total population. Disproportionately America’s prisons are filled with Black bodies. This criminal (in)justice system, ripe with racial discrimination, stigmatizes, profiles, and targets young Black men for arrest at a young age, having its roots in their hyper-policed neighborhoods that they are raised in, and sadly extending into what should be a safe space—the classroom, via the school to prison pipeline. Meek Mill is a victim of this systemic oppression. Yes, there needs to be action surrounding sentencing reform, but there needs to also be action taken around abolishing the racialized norms of injustice that can lead to Meek Mill serving 2-4 years in prison for non-violent parole violations, and Brock Turner only serving 3 months in prison for three felony counts of sexual assault. 📸: @karlfergusonjr

The case has been a strange and complex one, with Mill’s people claiming the judge had made some weird requests.

The 76ers have long been supporters of the rapper.

Co-owner Michael Rubin wrote a letter to Judge Genece E. Brinkley in an effort to keep Meek Mill out of jail, while Embiid and Ben Simmons attended Jay-Z’s 4:44 concert in Philadelphia wearing shirts in support of Mill.