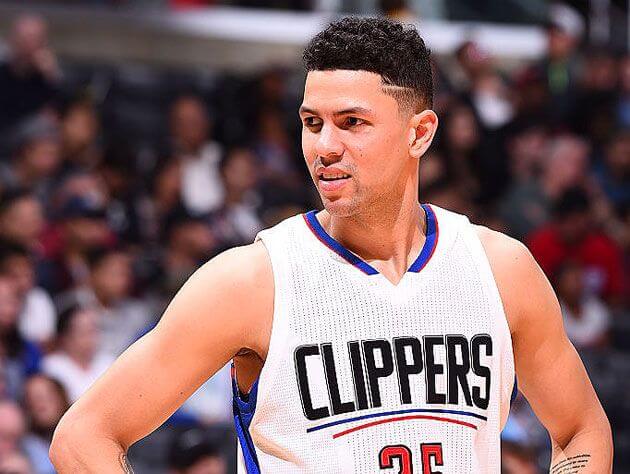 Rivers has never been the most popular guy in Los Angeles and that popularity has only declined further this season.

Already an underachieving lottery pick and the perceived beneficiary of nepotism on the part of his dad and Clippers head coach Doc Rivers, the younger Rivers then rubbed Blake Griffin out for at least two months by crashing into his knee on Monday.

Fast forward to Thursday and Rivers is getting worked over by Jazz rookie Donovan Mitchell.

After launching a wayward three at the end of the shot clock, flopping in attempt to draw a foul and then intentionally fouling Mitchell with his team trailing by 19, a fan sitting by the court seized the moment to get stuck into Rivers.

But the embattled guard wasn’t having it, launching a tirade upon the fan during which he could be heard saying “I’m going to smack the [expletive] out of you … if you don’t shut the [expletive] up.”

DeAndre Jordan pulled his enraged teammate away from the fan, only for Rivers to continue firing insults over his shoulder and across the court from the bench.

Rivers then addressed the exchange in the aftermath, per ClutchPoints.com’s Tomer Azarly.

“He was being a fair weather-ass fan,” Rivers said. “He was talking shit about the team, but he was cheering the first half. And then the second half he was talking about Steve Ballmer and Doc and DJ and saying demeaning stuff to my other teammates. ‘Austin and DJ, y’all need help.’ I don’t like that. I like fans who ride or die with you, and there’s a lot of good ones here that show up to the game. He was talking [expletive] about the team, not even me.”

Rivers said he later apologised and shook the fan’s hand because “I’m the professional, he’s not.”

Nothing like taking the high road while telling everyone all about it.