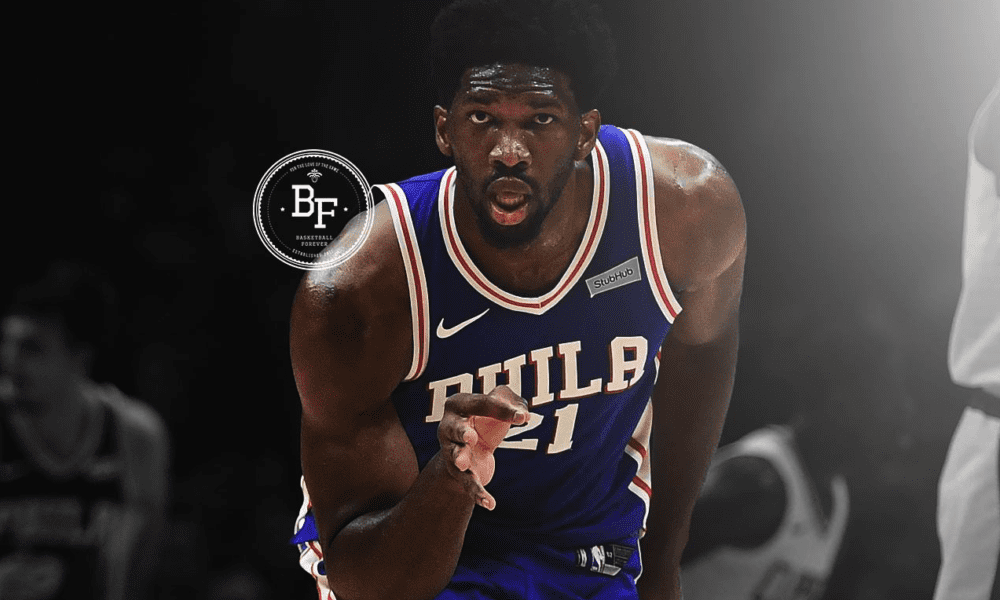 As Joel Embiid continues to establish himself as one of the most entertaining characters the NBA has ever seen, we countdown his greatest moments so far this season, both on and off the floor.

In no particular order…

CAREER NIGHT AGAINST THE LAKERS

It had never been done before.

It was everything we’ve always wanted from Embiid and more.

It made me a believer, not just in The Process, but in the basketball gods.

THAT EUROSTEP ON BROOK LOPEZ

Sure, it would’ve made more sense to have combined this category with the previous one, but a world in which a man this large can be so nimble makes no goddamn sense anyway.

TURNING THE TABLES ON JALEN ROSE

When Joel Embiid said his conditioning was at “69 per cent” after his demolition of the Lakers, Jalen Rose called him out for being unprofessional.

As always, Embiid had the perfect response.

When he was next asked about his conditioning, this time by ESPN’s Jemele Hill, Embiid said:

GETTING INSTANT REVENGE ON DONOVAN MITCHELL

During Philly’s home game against Utah on Monday, Jazz rookie Donovan Mitchell hit a pull up three over Embiid and followed it up with a little trash talk for good measure.

Embiid then got his revenge in hilarious fashion moments later.

When Mitchell drove the hoop, Embiid blocked his shot and talked trash right back.

Mitchell subsequently shoved Embiid, who dropped to the floor like he’d been shot.

As the referees handed the Utah rook a technical, Embiid emphatically mimicked the technical symbol with his hands.

How’s that for instant, glorious revenge.

HAVING THE LAST WORD WITH DRAYMOND GREEN

You may recall the 76ers going nuclear against Golden State to lead by 22 at half-time, only to lose the game 124-116.

Well that loss didn’t stop Joel Embiid from being a highly active member of the social media community.

After barking with Warriors All-Star and professional shit-stirrer Draymond Green for much of the game, Embiid had even more to say on Instagram after the game.

Now we know what it feels like to blow a big lead.. Gotta stay focused to get the job done. Great learning lesson and I also love playing against Draymond #TheProcess

Now that is some textbook usage of the ‘3-1 lead’ joke that will never – and should never – die.

Even when Embiid loses, he wins.

Embiid might be even less of a fan of LaVar Ball than most, and his latest trolling of Ball – and his family – was rather creative.

After annihilating the Lakers, Embiid posted a photo of himself skying for a layup over Lonzo Ball, with his location tag set to Lavar, Fars, Iran.

Given the recent LiAngelo saga, a tag somewhere in China would’ve gone down alright too.

STRUGGLING TO REMEMBER WHO THE HELL WILLIE REED IS

When Clippers big man Willie Reed brought down Embiid at Staples Centre on Monday, you just knew the former Jayhawk would get his revenge.

Embiid’s defence later caused Reed to travel and lash out in frustration once again.

Embiid just stood there, pointing and smiling at Reed as if to say “who even is this guy?”

He even capped off a hard night’s trolling by suggesting he didn’t know Reed’s name.

Embiid completes his masterful night of trolling the Clippers by telling Molly Sullivan he wanted to play “inside especially against DJ and … I don’t know what’s his name.”

After drawing three fouls on Hassan Whiteside in a preseason matchup with the Miami Heat, Embiid looked to the Heat bench and told them to get Whiteside out of the game.

They continued talking trash throughout the game and it spilled over onto social media afterwards.

The Twitter war started when some punter hailed Whiteside for holding Embiid to 1-7 shooting, and things really kicked off from there.

Dude they had to take your ass out or you would’ve fouled out in 5 min… And we’re talking about Preseason, not regular season….. #Softy https://t.co/IAIBDDypFK

And keep caring about stats and not your team success….. your +/- was ass @youngwhiteside #Softy

Embiid even managed to land a savage blow on Durant in the process.

My bad y’all , I thought I was using my burner account #TheProcess

All this gold, and we’re just over a month into the season.