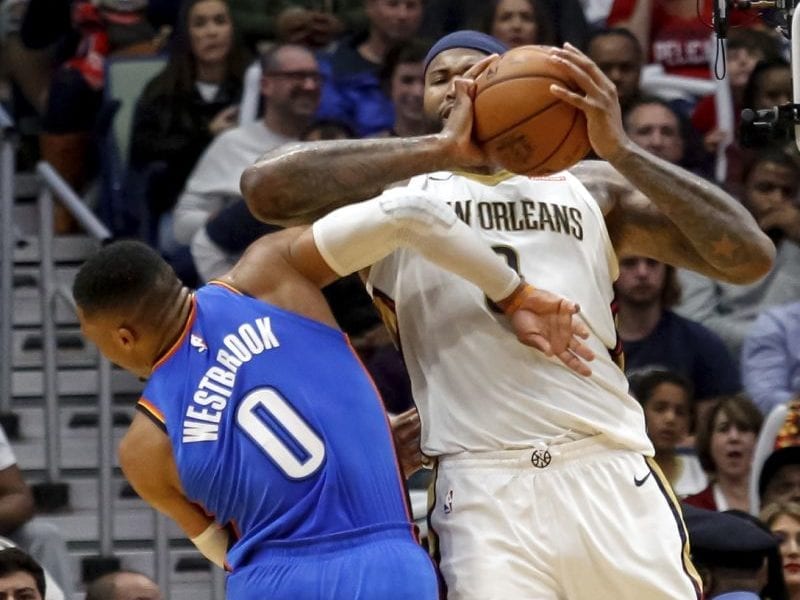 When DeMarcus Cousins is accused of something, it’s easy to assume he’s guilty given his colourful past.

But it’s that kind of inherent prejudice that his Pelicans teammates have used to state Cousins’ innocence after he was ejected for elbowing Russell Westbrook in the head on Monday night.

Just as a jury must not take into account a defendant’s prior convictions, Pelicans guards Tony Allen and Jrue Holiday seem to believe the same should hold true in the NBA.

Allen even believes Westbrook intentionally used Cousin’s history against him, according to The Norman Transcript’s Fred Katz.

“He took advantage of Cousins’ history. He was going to get the best of that call…You saw him get right back up and miss the free throw. He missed it, so you know what that means. The ball don’t lie.”

Allen also said there was no doubt in his mind that Westbrook flopped.

Holiday was next to jump to Cousin’s defence.

“We didn’t think it was that fair,” Holiday said, according to the Associated Press. “He doesn’t do anything intentional. We just wanted to win for him.”

Addressing the matter at practice on Tuesday, Cousins claimed to be protecting his rebound the way all big men are taught from a young age, holding the ball high while squeezing it with elbows flared to stave off pesky guards.

Cousins said Westbrook “did a good job of selling” the foul, adding that he wasn’t sure what he could do differently, other than sending Christmas cards to the officials when the festive season kicks into full gear.