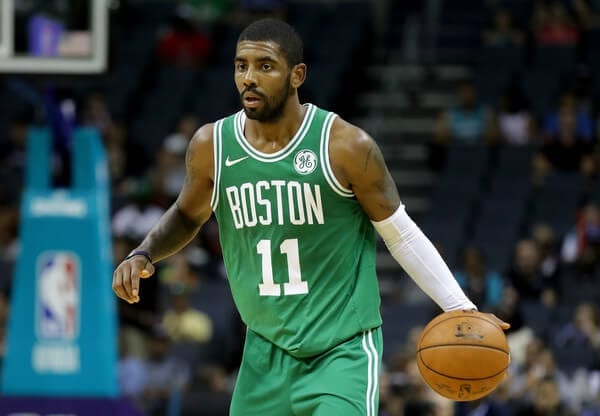 In the aftermath of the Celtics beating the Warriors and extending their winning streak to 14 in the process, we break down some of the key talking points as the dust settles.

KYRIE IRVING CAN ALWAYS BE RELIED UPON IN CLUTCH SITUATIONS

Such is the extent of Kyrie Irving’s clutchness that it doesn’t matter what happened in the previously 47 and a half minutes, he’s always ready to make the game-winning play.

Kyrie had just five points through the first three quarters, but he has a short memory and in the fourth quarter laid his mask – and the Warriors – to rest with an 11-point outburst.

His fourth quarter was highlighted by beating Draymond Green – who is only the reigning defensive play of the year – off the dribble before drawing a foul on him at the rim with 14 seconds remaining.

Irving’s resulting free throws weren’t the final points of the game, but they were the decisive go-ahead winners.

JAYLEN BROWN IS ALREADY ON THE BRINK OF STARDOM

The jury was out on Jaylen Brown last year.

While he made some compelling points to the jurors present, there were inconsistencies in his arguments and the case was adjourned for a year.

The potential to really blossom into some special was evident throughout his rookie season.

But he also had nights where his destiny appeared to feature him becoming an ‘elite role player’.

This year Brown has shown us which path he’s chosen to go down, while telling off anyone who overreacted to his rookie season without saying a word.

The second-year guard was exception all night on Thursday.

Playing after the death of a close friend, Brown finished with 22, 7 rebounds, 2 assists and 2 blocks.

He was the primary force willing Boston back into the game during both of their 17-point comebacks, making energetic plays on both ends.

Saying Golden State were terrible on offence is like saying ice is hot and fire is cold.

It’s the complete opposite of what we’ve known to be true for as long as we can remember.

And yet, that was the case at TD Garden on Thursday.

The Warriors’ usual flow wasn’t there and their shooting was particularly bad.

Kevin Durant (9-18 for 24 points) was the only Warrior bringing anything of lasting value to the table offensively.

Golden State are so talented and so deep that they can usually account for one or two of their main guys having an off night.

But when almost all of the primary cogs get jammed, even this traditionally well-oiled machine can’t run smoothly.

BOSTON IS ALREADY A LEGITIMATE CONTENDER

It’s dangerous to make bold statements in November, a full seven months before the NBA Finals.

But I’m not sure what else the Boston Celtics have to show us to convince us they’re for real.

They have the stingiest defence in the land (95.4 points per 100 possessions), they have four genuine studs following the emergence of Jalen Brown and Jayson Tatum, their head coach is an actual wizard, they’ve won 14 in a row and they just showed they can hang with the freaking Warriors.

With Cleveland faltering, there’s every chance we could see them in June and anything less than taking the Cavs to the brink in the Eastern Conference Finals will be considered a failure.