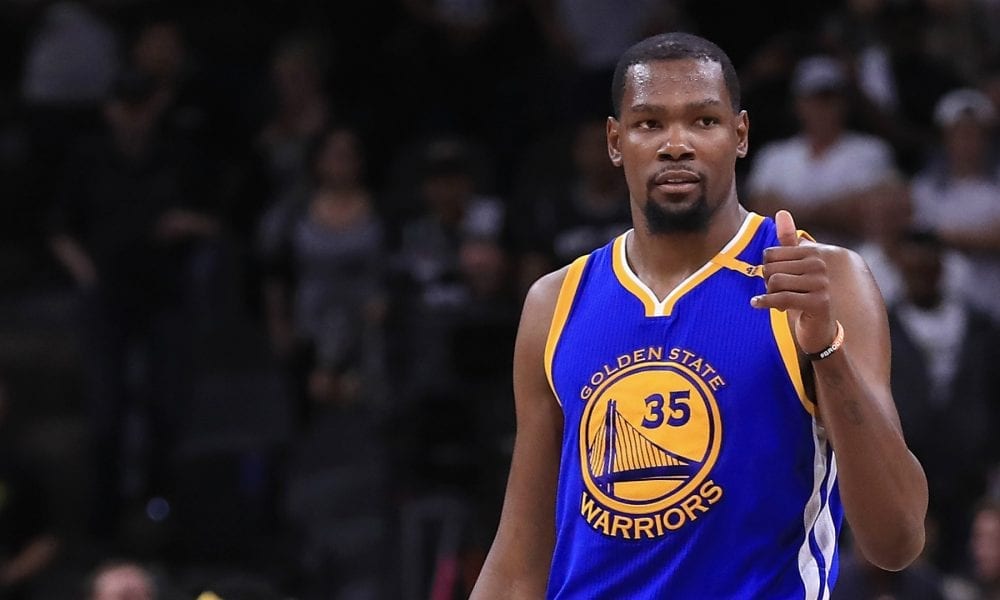 Like any end to a long-term relationship, there was a lot of emotion in the air when Kevin Durant left Oklahoma City for Golden State in July 2016.

The Thunder and its fans couldn’t believe Durant would leave them for the team that had just knocked them out of the Western Conference finals.

Meanwhile, Durant couldn’t believe the backlash would get as nasty and personal as it did (clearly someone was channel surfing during The Decision).

Unlike his former teammate Russell Westbrook, who traditionally snarls at the media from a distance, Durant has been remarkably candid when discussing his messy OKC divorce, a trait best highlighted in his series of lengthy podcasts with Bill Simmons.

Durant has since opened up further, sitting down with Bleacher Report’s Ric Bucher for a fresh feature which was released on Thursday.

When discussing the Thunder giving his famous number 35 to another player – two way G League player PJ Dozier of all people – he didn’t hold back when it came to sharing his thoughts at the time.

I intended this story to be primarily about the Thunder franchise’s move and how it impacted its young star, Kevin Durant. Then I spoke with KD and he hijacked my plan with his candor & reflection on, well, everything: https://t.co/eMzdroVjDR

But KD said it didn’t take him long to see the bigger picture and move on.

“Then I had to get out of my head, tell myself, ‘It’s not that serious, it is what it is.’ I understand it’s not my number anymore, they can do whatever they want with it, but you hand that number to a two-way player, you’ve got to be, like, ‘Nah, we’ve got too many good memories with this number, man.’ But at some point, that thing’s going to be in the rafters anyway; it’s all good.”

One of several recurring themes of Durant’s interview was ‘hey, it’s just sports’, and that the relationships he forged in OKC will last forever, even if some of them remain damaged by his defection to the Warriors.

“I did something they didn’t like. They did something I didn’t like. S–t happens. If I was on my death bed, I guarantee you Sam Presti and Russell Westbrook would come check on me. So I’m going to look at it that way rather than the other way.”