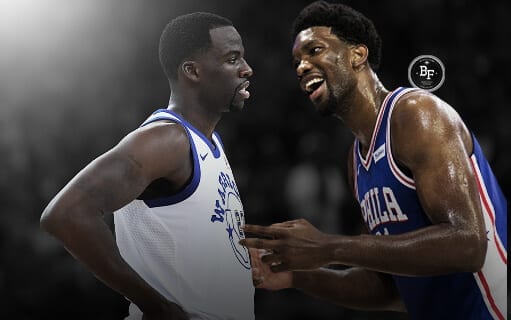 There’s a mutual respect between Joel Embiid and Draymond Green.

They both like to talk shit as much as Donkey from Shrek, even if only one of them looks like him.

The day before getting his first ever crack at playing the Golden State Warriors, Embiid told reporters he caught up with Green over the summer as the pair exchanged numbers and bonded over their mutual love of trash talk.

“I mean, I saw Draymond this summer and I told him I was gonna kick his (expletive), so I can’t wait to play against him. I love the way he talks trash, and I feel like I’m kind of the same so it’s gonna be a fun battle, especially going against Steph, Klay, KD, I still haven’t played against them, so I’m excited.”

Joel Embiid started trash talking with Draymond Green this past summer when they were at a dinner together. Said it's all in fun, they swapped numbers, likes that Green talks trash too.

Despite being drafted in 2014, Saturday marks Embiid’s first ever crack at the Warriors.

After going down to Sacramento in a heartbreaker on Thursday, the big man will be hungrier than ever for success.

Embiid’s trash talk is always amusing, but a dominant performance against the best team in the business would truly speak volumes.