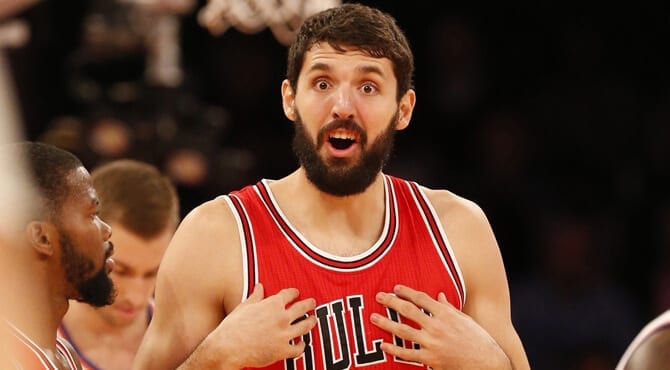 When Nikola Mirotic and Bobby Portis came to blows at training just two days before the Chicago Bulls’ season opener last month, the incident had all the makings a chemistry disaster.

But it actually seems to have united the Bulls’ playing group, most of which is standing behind Portis, according to the Chicago Sun Times’ Joe Cowley.

Cowley has reported that while none of the players dispute Portis’ actions were wrong, it was Mirotic’s sense of entitlement which had long rubbed them the wrong way.

Mirotic then issuing a “me or him” trade ultimatum reportedly only solidified the Bulls players’ loyalty to Team Portis.

Chicago’s players also believe Mirotic failing to respond to Portis – who has supposedly done what he can to repair the situation – showed his lack of willingness to move on from the situation and indicated that it was Mirotic who needed to go.

Additionally, Portis is believed to be the more liked player, even before this almighty whole shitstorm hit.

As Cowley notes in his piece, it’s debatable whether all of this is fair on Mirotic.

After all, it’s much harder to move on from an incident like this when you were the one on the receiving end.

But life isn’t fair and neither is locker room politics.

The Bulls players have spoken.