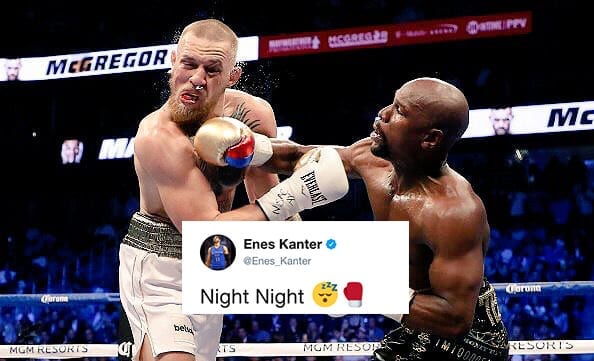 Floyd Mayweather beat Conor McGregor, improved his record to 50-0 (passing Rocky Marciano’s 49-0 record), joined Tiger Woods and Michael Jordan as the only athletes to ever earn a billion dollars from sports and then called it quits (again).

LeBron James and JR Smith were some of the many NBA players who had either attended the event or were keenly watching at home.

Isaiah Thomas is on The Money Team! Who you got? Mayweather or McGregor!?

Fingers ready on their keyboards, they typed away at the conclusion of the fight.

Here’s the collection of tweets.

Congrats @FloydMayweather!!! 50-0 is unprecedented!!!! Was a treat and honor to witness history.

S/O @TheNotoriousMMA!! Showed you're a champ and monster in your own right as well. Lot of respect!

I'm not mad that I stayed up all night to watch this fight. 👏🏾👏🏾👏🏾 @FloydMayweather is definitely TBE!!! @TheNotoriousMMA Much Respect!!

But let me say: I have an enormous amount of respect for @TheNotoriousMMA! Amazing fight! No reason to ever have his head down.

A lotta respect for McGregor. Going into another sport showed how great of an athlete he is. Happy he walked away with a lot of $$$ too.

For the culture 😂 ''twas a good fight

Respect to @TheNotoriousMMA for accepting the challenge.. but @FloydMayweather the greatest to ever do it! Great to witness history. 50-0

.@FloydMayweather is so precise😱. Bravo good sir. @TheNotoriousMMA ran out of gas but I like that he wanted to keep going even if KO. 💯

Respect to them! Great fight🥊🥊 experience kicked in for sure

Hell of a show. Lot of respect to both of them for what they have become. #greatness

My Gregor is the truth but this fight was hyped up when we knew what would happen … ultimately https://t.co/CBnk1Vnnbd

He looked good for a lot of the fight https://t.co/CJsWq4eWJp

This was better then the pacquiao!! First time Floyd actually fight 👊🏾👊🏾

Love that Floyd won, and love that Conor got paid.

Conor still the double champ I don't care what anyone say