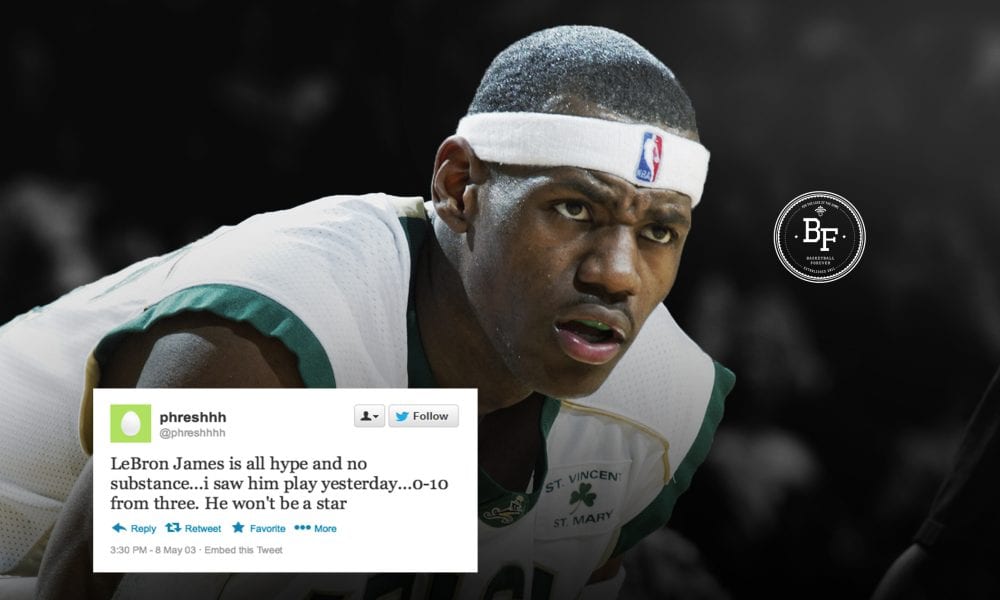 LeBron James is one of the greatest players to ever step foot on a basketball court, it’s hard to imagine a time when people couldn’t see a form of greatness within him.

Regardless of where you think LeBron is on the all-time list, you know he’s definitely in the conversation with his illustrious career.

Kobe Bryant is another player who’s in the Top 10 conversation but was panned in some scouting reports which we published last year here.

Whilst LeBron was much more hyped than Kobe coming out of highschool, it’s always fun to read what the internet geniuses of 2003 thought of him.

Reddit user AllOfASudden101 has compiled a short list of some funny comments left in message board threads back in ’03 regarding LeBron’s chances of being great.

“The only thing I question is whether he is a better draft choice than the Yugoslavian kid Darko Milicic. Apparently a PF/SM with Duncan’s fundamentals and Garnett’s perimeter game. Darko will come in with less hype than James, so it may make his development a little easier.”

“I think that due to all of the outisde factors he will have to deal with above and beyond just playing the game, his rookie year will not be too productive. I also think that, in the long run, his NBA career will be something along the lines of Rodney Rogers. Certainly a good player with a momentary flash of greatness, but in the end not a superstar and not a basketball savior.”

Lebron James…all hype not much substance…I saw him play yesterday…0 for 10 from 3 pt land..he blew past nobody..He can’t dribble to the left..the only thing that impressed me was that he can use his left hand to an extent…however i didn’t see him blow past anyone..I don’t think he will be a star…His size won’t matter much in a few years..Bill Walton is ridiculous

what worries me abuot James though is that he has more expectations on him than anyone to come before him. I worry that if he doesn’t click right away he’ll never live up to the hype and he’ll just be another one of those “could have been greats”

If you’re interested in seeing how James’s future teammates felt about him, check out the video here