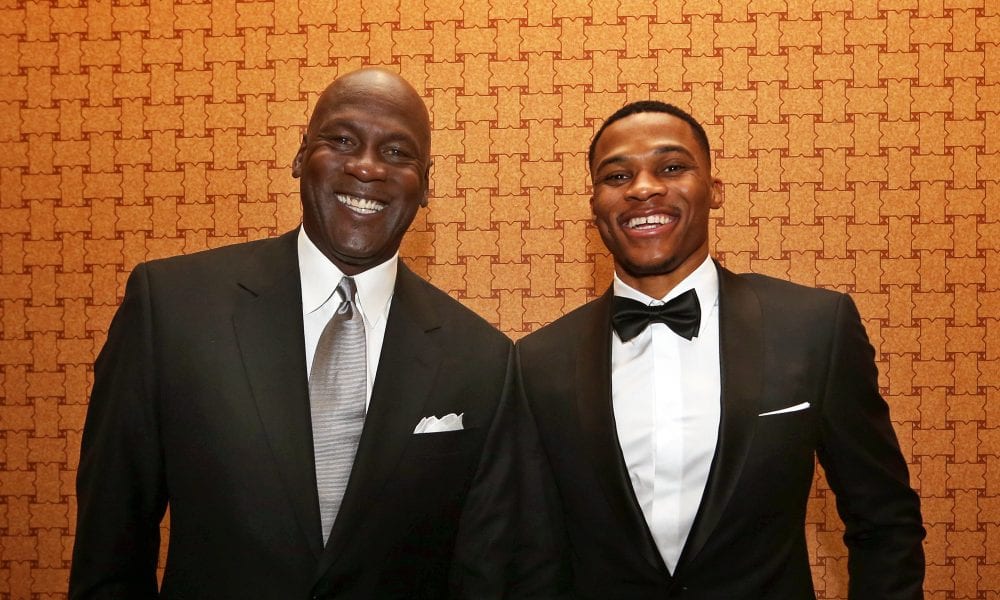 Michael Jordan shows his appreciation for Westbrook’s greatness during his OKC HOF induction.

Russell Westbrook was inducted into the Oklahoma Hall of Fame on Thursday night and Michael Jordan—who has always talked about how much he admires Westbrook as a player —was there to deliver a speech to help introduce Westbrook to the crowd. The GOAT discussed his similarities with Westbrook and the “loyalty” he has shown to both the Thunder and the people of Oklahoma City. MJ said it’s that loyalty that Thunder fans should be most proud of with regards to Westbrook.

“Another thing you guys should be proud of is the sense of loyalty this kid has shown. He could’ve easily come to Charlotte,” Michael Jordan joked. “But he decided to stay here in Oklahoma. I’m not here to try and bash anybody that’s not here. Everybody has a choice. I’m not saying everybody doesn’t have a choice. But when I saw he chose to stay in Oklahoma, I was so proud, and as [Thunder owner] Clay [Bennett] knows and Russ knows, I texted him to show a sense of respect.”

MJ continued by saying that he didn’t hesitate to say yes when Westbrook called and asked him to introduce him at his Oklahoma Hall of Fame induction. “When Russell asked me to be a presenter, I didn’t even pause because of the relationship and the respect that I have for Clay [Bennett] and obviously the respect that I have for Russell,” MJ said. “I’m truly a fan of his. If you can ever say, being that we’re so many years apart, that I can now watch him play, I see a lot of resemblance in his passion for the game of basketball in the way I play the game of basketball.”

During his induction speech, Westbrook alluded to some of the social issues challenging the entire nation and said that he wants to be a part of helping the state of Oklahoma to grow and move towards a better future. “After witnessing the divisions and the challenges of our nation we have been facing for the past several months, I’ve realized this honor’s not about me nor the people in this room,” he said. “Oklahoma is an unbelievable community. I’m so appreciative of the fact that the people of Oklahoma have been so supportive of welcoming my family and I. However, I feel there’s always room to grow. I can be better, you can be better, and we can be better together.”

You can watch the speeches that MJ and Westbrook delivered to approximately 1,500 people who attended the Oklahoma Hall of Fame induction ceremony in the videos above, which were both taken by Norman Transcript Thunder beat writer Fred Katz.