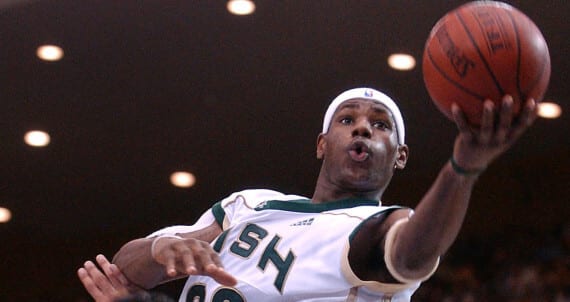 We turn back the clock to some of LeBron James’s best moments of his high school career.

After winning an NBA championship for his hometown Cleveland Cavaliers last year, this season is bound to feel like a victory lap for LeBron James. He was winning much before Cleveland and Miami, though. Let’s take a look back at some of his highlights from high school, when people quickly realized he was destined for greatness.

6. LeBron Between the Legs

While Jason Richardson was trying to master the between-the-legs dunk during the NBA Slam Dunk Contest, LeBron James already had it figured out at the high school level. During a game. It’s a shame he has never competed in the Slam Dunk Contest in the pros.

5. Taking It to the Gridiron

Okay, so his football highlight reel is pretty irrelevant to his NBA career. Still, look at how huge he is! People are going to keep asking about his hypothetical career as a tight end in the NFL until he gives it a shot.

This game cemented LeBron’s status as a high school phenom. Oak Hill Academy was ranked as the top high school basketball program in the nation. All LeBron did was record a dominant double-double with 31 points and 13 rebounds, and tacked on six assists as St. Vincent-St. Mary won by 20 points.

The person who sent a full court pass to LeBron James may be more deserving of the highlight reel, but this play embodies James’ persona on the court. He has an easy layup in front of him, but instead chooses to lay it up off the glass and allow one of his teammates to finish off the play. He’s the best passing big man in NBA history.

Being a supremely athletic individual doesn’t just give you the right to dominate on offense — defense can be your calling card too. Long before LeBron was saving NBA titles with his blocks, he was embarrassing high school hopefuls who clearly didn’t know what they were getting into.

It doesn’t matter what league you’re in, scoring 52 points is extremely impressive, and LeBron had his high school high against Westchester (CA), who also had 52 points. ESPN took notice and Trevor Ariza took notice on the opposing bench, as the world was witnessing the emergence of arguably the greatest all-around player in basketball history.