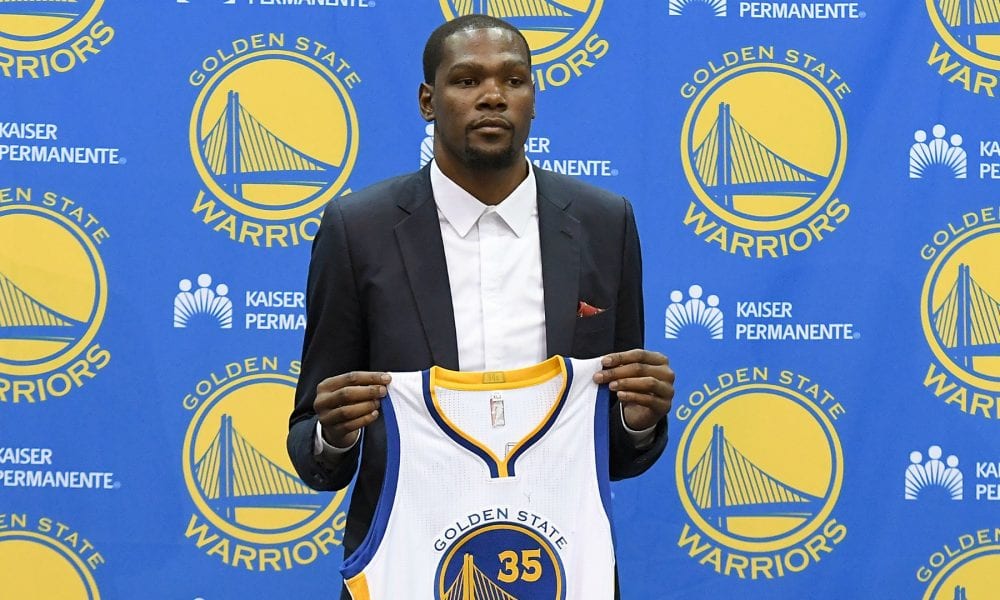 With an NBA superstar like Kevin Durant joining a team full of talented players, Head Coach Steve Kerr will have the big task of finding ways to integrate Durant into the offense while keeping players like Steph Curry and Klay Thompson happy.

Now there is the common argument that all of these highly talented scorers couldn’t possibly share the ball between them. Jazz center Rudy Gobert was the first of many to weigh in on the argument.

But if there’s an already-established team capable of fitting Durant into its offense, it’s Golden State. Let’s take a look at how they could do it.

The Warriors averaged 87.3 shots a game last year. The team’s top four scorers — Curry, Thompson, Green and Harrison Barnes — took 57.2 of those attempts on average. Durant will eat up Barnes’ 9.6 attempts, which is 10 fewer than his average output with Oklahoma City. Here’s how the Warriors can ration their shots in order to find those 10 extra attempts for Durant:

Rest of the team: 27 shots per game

Curry and Thompson will have to sacrifice only three shots a game between them to fit Durant into the offense.

Curry will have to give up some of those off-the-bounce 3s that make for great highlights but bad team offense. The same goes for Thompson’s off-the-dribble attempts, which are by far the least efficient shots he takes. And expect Durant to sacrifice some of his isolation attempts and do more work down low, which fills a big need for the Warriors.

When the jack-as-many-3s-as-humanly-possible strategy wasn’t working, Golden State didn’t really have a Plan B on offense. A big reason the Warriors struggled late in the Finals.

Enter Durant, who was one of the best post-up players in the league, scoring a ridiculous 1.23 points per post-up on 60.9% shooting, per NBA.com. Now that’s quite the Plan B.

Durant’s presence won’t prevent Thompson and Curry from splashing 3s at a historic rate. And he won’t do anything to reduce Green’s hustle points. Durant will get those guys better shots while adding an entirely new dimension to a historically-efficient offense.

So, yes, there’s only one ball to go around, but the Warriors will now have even more ways to put it in the basket.