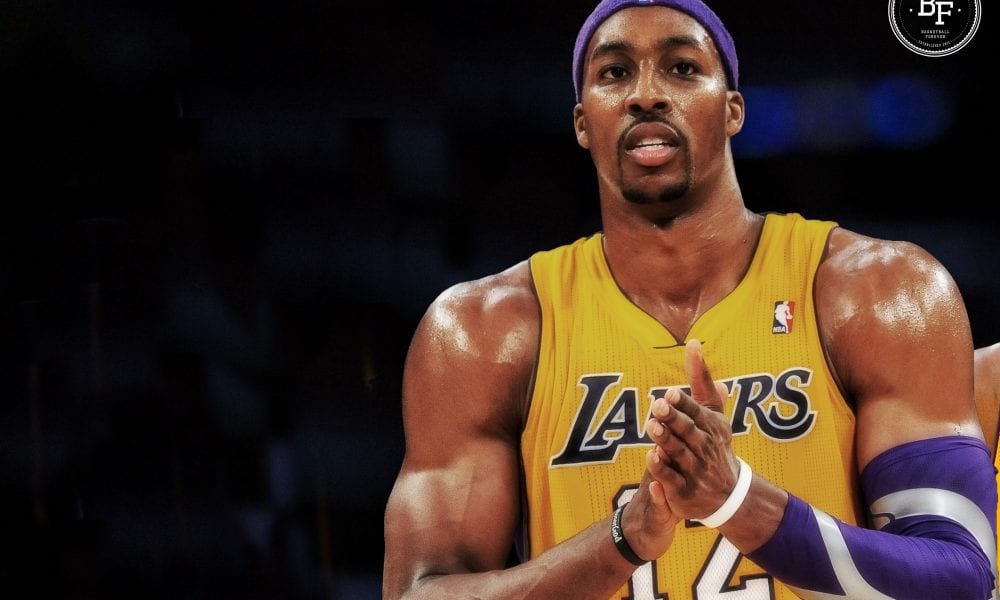 Reddit user Caleb_Pitts has put together a hilariously creative analysis of Howard’s shoulders and it’s definitely worth the read.

But what makes him tick?

But what makes his shoulders tick?

That’s the kind of question we’ll be answering today. How did his shoulders get so big? How big are his shoulders? Why are my shoulders so small? I’m self conscious about my small shoulders, how do I make them big? Most of these will be answered, but probably not all of them.

Dwight David Howard was born December 8, 1985, to two parents. I could look up who those two parents are, but instead let’s say his dad was Wilt Chamberlain, on account of his boning ability, and his mom was Goro from Mortal Kombat, on account of his shoulders. The doctor made no note of Dwight’s shoulders at birth, but he did describe the newborn as “a bad locker room presence”.

Dwight had a normal childhood, shoulder-wise, and even when he was drafted his shoulders weren’t big enough to distract from his actual existing braces. Dwight’s shoulders slowly grew through his first four years in the NBA though, with widespread attention being brought to them in the 2008 Slam Dunk Contest, in which Dwight performed his winning dunk as his crime-stopping alter ego “Shouldersman”. The dunk was so impressive that it actually restarted judge Julius Erving’s heart, which no one noticed had abruptly stopped beating earlier in the competition. Upon regaining consciousness, Erving gave the dunk an eight out of ten.

After a 3-peat of DPOY awards and a trip to the finals, Dwight’s dominance as the best center in the league started to wane. In 2012, Howard reportedly missed 35 practices with the Orlando Magic, citing scheduling conflicts with his many parent-teacher conferences. That was a joke, by the way. Dwight doesn’t know where his kids go to school.

After a messy break from the Magic, Dwight headed to Los Angeles to make more children and play alongside a macaroni sculpture of Steve Nash. Hopes were high for the Lakers, but the team never reached it’s full potential due to a number of problems, including injuries to the sculpture of Steve Nash which, again, was made of fragile, dried macaroni. The seemingly stacked team was swept in the first round of the playoffs. Dwight and his shoulders left LA at the end of the season, seeing the writing on the wall, which spelled “GET OUT” and was written in blood by teammate Kobe Bryant.

Before starting his next season in Houston, Dwight hit the gym hard. Man, he was working on his shoulders every damn day in every way he could think of, he was taking all the groceries from his car to his house in a single trip like some roided up lunatic, he was picking up his kids for the first time in their lives, then putting them down, then picking them up again, just to get a workout in. He was determined to make this his year, and he had new, oddly specific goals; He was gonna make his shoulders the most iconic physical trait in the NBA. What was his competition? He couldn’t think of any

Dwight landed in Houston, already wearing his Rockets jersey (It was actually a t-shirt when he put it on, but his shoulders are so big at this point that they burst through any shirt he tries to wear, making it a jersey) and ready to take his crown. James Harden met him when he got off the plane, they shook hands, Dwight was called for a foul, and Harden took two free throws. A couple weeks in, practice was going great. Dwight thought this year was gonna be his season, until one day, when browsing the Rocket’s online store, Dwight started noticing all the beard-related James Harden merchandise, and not noticing all the shoulder-related Dwight Howard merchandise, because there wasn’t any.

How could he have been so stupid? Of course James harden has the most iconic physical trait in the NBA, beards are a “thing” right now. Dwight couldn’t wait till shoulders were a “thing”, that’s gonna be dope, because it will definitely happen. But, for now, he was pretty steamy about all this.

At team workouts the next day, Harden was struggling to bench press two helium filled balloons. “Hey, could I get a spot?” He asked Dwight. Dwight silently nodded, knowing this was his chance. He got in spotting position, fingers on the bar that, if dropped, could end James Harden and his beard, making Dwight’s shoulders the #1 physical trait in the whole NBA. At that very second, two imaginary shoulders appeared on Dwight’s not-imaginary shoulders, one with red horns and a pitchfork, the other with angel wings and a halo, a la The Emperor’s New Groove.

“Do it! Drop the bar!” Sneered the Devil shoulder, who was trying a little too hard.

“Don’t drop it! Think of the Kardashians!” said the Angel shoulder, with a reference that was very relevant at the time this story takes place.

Dwight didn’t know what to do. Should he take his chance to end his only competition, or should he not murder James Harden? It was a tough decision, but then Dwight remembered that if he committed murder, his children would always know where he lived, because he’d live in jail. He would have no excuse to not see them, and he couldn’t let that happen.

Dwight held the bar while James Harden finished working out. “Hey, I’m not sure why I’m saying this, because obviously you never considered doing it, but thanks for not murdering me, it would have been really easy.” said Harden. They high-fived, Harden took 2 free throws, and Dwight gave up on his dream shoulders, leaving for atlanta a couple seasons later.

And that’s the true history of his shoulders. Let’s move on.

How important are the shoulders to Dwight’s game?

Long Answer: Very important. So important that I, Caleb Pitts, will go on record saying that without shoulders, Dwight Howard would be significantly worse at basketball. If Dwight’s amount of shoulders was accurately listed as “none”, it’s safe to assume that he would have difficulty in three distinct areas that are important to his play-style, and possibly more:

Dunking: This jumps out immediately because, without the rotator cuff in his shoulder joint, Dwight would not be able to stretch his arms above his clavicle higher than the distance of his elbow to his fingertips. Dwight is listed as 265 pounds (although he would be closer to 190 without his shoulders), and to compensate for the loss of length, he would have to increase his jumping strength exponentially. This re-conditioning might prove difficult, and could sap a key element from his game. My recommendation would be to duct tape all of his children to himself while training in order to strengthen his legs, simultaneously fulfilling his legally required time-spent with each of his unwanted kids.

Holding the Ball: This is probably the biggest one because, without shoulders, there’s very little hope that Dwight Howard would be able to hold a basketball with two hands. This is especially devastating to his career, because his career is playing basketball. The saving grace here is that Dwight has large enough hands that he can easily palm a basketball, but even still, there’s not much you can do with any sort of ball if you genuinely have zero shoulders.

Producing Children: Dwight Howard has a lot of sex with a lot of different women. There’s no doubt that would probably change if he had his shoulders voluntarily removed because, as you can see in this professional artist’s rendition, he looks pretty weird without any shoulders. One of Dwight Howard’s personal goals is, as he put it, “Having enough kids that I can celebrate a birthday every day. I really love birthdays.” Having no shoulders would, in all likelihood, keep him from accomplishing this.

So, what does this all mean?

I tried e-mailing a professor at my local university to get a more academic view of Dwight’s shoulders, but they didn’t seem interested. So I guess I gotta do this part myself. Fuuuck man I was really counting on that guy.

Per bball reference, Dwight’s best overall season was his 2010-2011 season with the Magic. That year, he put up monster numbers defensively, earning a DPOY award, and dropping 22 ppg on the other end of the floor. This is definitely a fact, but what does it have to do with his shoulders? I don’t know yet. How does Zach Lowe do this shit?

Ok so i’m gonna say there’s a positive correlation between the size of Dwight’s shoulders and his caliber of play on the floor. To further back that up, here’s a picture of his shoulders his rookie year, when he was only posting 12 ppg. Lookin’ pretty dorky man, lookin’ pretty scrawny honestly. I think this proves it, Dwight’s peak game coincides with his peak shoulders. Peak shoulders was the 2010-2011 season, and if he ever wants to get back to elite performance as a player, he’s gonna need to get back to that elite level of shoulders. I’m gonna ballpark the difference in mass between Dwight’s current shoulders and his peak shoulders at 14.7%. Yeah, that sounds right. So, in conclusion….

For Dwight to return to his borderline MVP performance level, he needs to increase his shoulder mass by 14.7%.

Holy shit I did it. Bitch I feel like Nate Silver.

If you want to keep up with me once the season starts and the mods stop letting post this kind of bullshit, hit up my Twitter.