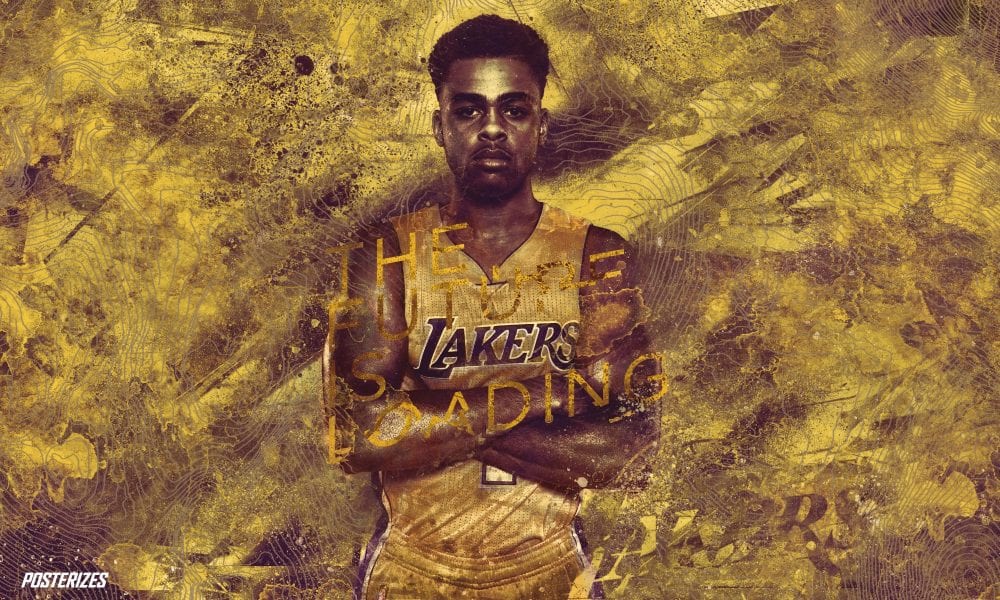 After a turbulent rookie campaign, the Lakers point guard is looking to expand upon his subtly historic season.

D’Angelo Russell’s rookie year was doomed from the start with Zombie Kobe given license to fire inefficient shots at will and Byron Scott doing more criticizing than coaching. The Ohio State product sputtered early while other rookies sparkled; it began to look like Kristaps Porzingis and Jahlil Okafor were the ones who got away for Lakers fans. Then, as soon as Russell showed promise, the Nick Young scandal melted the ice in his veins. Russell’s season ran ragged with fits and starts, but Scott is gone now, and the Kobe Bryant Show had its series finale in April. The upcoming season could be his chance to flourish.

Russell’s averages of 13.2 points and 3.3 assists per game don’t look like numbers befitting a franchise savior, but a deeper look reveals a surprise: He was actually a historically productive rookie.

He was one of only 18 rookies (age 20 or younger at the end of the season) who have scored at least 20 points per 100 possessions with an assist percentage over 20, per Basketball-Reference. The list includes Hall of Famers: Magic Johnson and Isiah Thomas; All-Stars: Stephon Marbury, Gilbert Arenas, LeBron James, Chris Paul, Russell Westbrook, Derrick Rose, John Wall, and Kyrie Irving; proven veterans: Mike Bibby, Lamar Odom, Tyreke Evans, Brandon Jennings, and Brandon Knight; and promising youngsters: Zach LaVine and Emmanuel Mudiay. The Lakers rookie couldn’t have found himself in better company; every player on that list is asuccessful NBA pro.

Russell wasn’t perfect, but no rookie is. It couldn’t have been easy playing with Kobe, who used possessions as often as Stephen Curry while scoring as efficiently as Josh Smith, and shot as many 3s as Kevin Durant with the accuracy of Jared Sullinger. What the Lakers did was the equivalent of the Wolves taking the ball from Karl-Anthony Towns and giving it to Kevin Garnett. The Farewell Tour took valuable experience away from the Lakers’ young players. Give the Lakers credit for this, at least: Russell played nearly half his possessions without Bryant, per NBAWowy.com, so he got some time to work as a primary facilitator.

Russell played so well without Kobe that he could have been in the conversation for second-place Rookie of the Year votes if Bryant hadn’t played last season. His usage skyrocketed without Bryant, and while his scoring efficiency dipped slightly, his per-36 numbers improved drastically. He projects as the full-time starter alongside Jordan Clarkson under new Lakers head coach Luke Walton, so he could receive a similarly high usage rate. It’ll be a shock for Lakers fans to go from Scott’s Kobe-centric isolation offense to Walton’s free-flowing, motion-based system. But the stylistic change is tailor-made for Russell’s strengths as a versatile combo guard.

Russell operates like a Tesla: His top speed is limited, but he accelerates smoothly, changes directions quickly, and no matter his pace, he has a sense of space and precision. Walton might not yet trust Russell on autopilot, but he has the potential to be a model point guard of the future.

Many of the league’s top point guards embody the qualities Russell displays in the clips above, navigating by shifting gears and using silky smooth hesitations. He scored only 0.71 points per possession (36th percentile) in the pick-and-roll, a surprisingly low number since he was at his best in the pick-and-roll in college. But that might’ve been because he lacked a rim runner like Timofey Mozgov, who scored an elite 1.22 PPP as a pick-and-roll screener, per Synergy. With Mozgov rumbling down the lane, Russell will be given a full array of options as he probes the defense.

Russell’s vision and creativity are rarely found in players his age. He has a habit of seeking highlight plays, which leads to many careless turnovers as shown by his pedestrian 1.36 assist-to-turnover ratio, but that can be improved with experience. The foundation is there. He’s unselfish. He whips the ball accurately off the dribble. At 6-foot-5, he has the size to see over the defense. If the Lakers’ style resembles the Warriors at all, Russell’s ability to see a play coalesce should naturally lead to open looks via ball movement.

That style should also work for Russell even when the ball isn’t in his hands, since he’s capable of morphing into a traditional 2-guard. He knocked down a robust 40.7 percent of his “open” 3s, as defined by SportVU, a stark difference compared to a dismal 16.9 percent on “tightly” contested 3-pointers. Those rates could equalize, but the disparity is noteworthy since some of the mechanical issues he displayed in college — notably, his inconsistent footwork shooting off the catch — still persist in the NBA, which hurts him when he has a hand in his face. But those concerns could be moot if Walton’s Warriors-influenced offense creates more open opportunities when he plays off the ball. Golden State led the NBA in off-screen frequency,per Synergy, and that’s a play type that could help Russell; he was excellent shooting on the move at Ohio State, but rarely had opportunities as a rookie.

Russell did do plenty of posting up, though. He was a major mismatch against smaller defenders, scoring 0.93 PPP (77th percentile). Russell says he’s “living in the weight room,” and getting stronger should help him on the low post, so it’s easy to see Walton finding ways to use Russell like Shaun Livingston, a similarity oversize point guard who takes advantage of smaller guards down low. The low post isn’t an efficient scoring zone, which is why bigs are migrating to the perimeter, but low-post skills can still be useful. It’s become increasingly common for teams to use the post as a passing point, which makes it a natural spot for a guard to operate.

Russell’s versatility as a scorer and playmaker will enable Walton to be creative with his lineup choices. He’s already proven to be a solid backcourt fit with Jordan Clarkson, since both can initiate the offense or play off the ball. Russell is a superior shooter at this stage, but Clarkson has made significant strides since college.

Brandon Ingram, the no. 2 pick in this year’s draft, is also a perfect partner for Russell and Clarkson. He’s a lanky 6-foot-9 forward who can stroke 3s (41 percent at Duke), run pick-and-roll, fire pinpoint passes, and pull up from midrange. If he’s flanked by Russell and Clarkson, with Luol Deng at stretch forward and Mozgov plastering defenders with screens, L.A. could have more spacing and versatility than it has had in years.

Walton spent his career playing in the triangle offense, elements of which are found in Steve Kerr’s motion-based system. The plays cooked up by Kerr and Walton can be installed in Los Angeles. In watching the inevitable Steph Curry-Kevin Durant pick-and-roll throughout the upcoming season, we might also be watching the basis of the Lakers’ future in Russell and Ingram. When defenses switch on the play, it’ll put a slower defender on Curry and a smaller defender on Durant. Curry will either juke his way into an off-the-dribble 3 or slither into the paint, collapsing the defense. Or Curry will feed Durant, who can brutalize the switch in the post. Russell’s no Curry and Ingram’s no Durant, but their skill sets offer rough approximations. Don’t be surprised to see Walton use his young Lakers like junior Warriors.

The Lakers’ core is young and malleable, with skill sets that can at least be molded to resemble the league’s best players. The next decade will be defined by teams that can match the Warriors’ positional versatility and shooting ability. The Lakers are building a club emphasizing those qualities, with Russell serving as the catalyst.