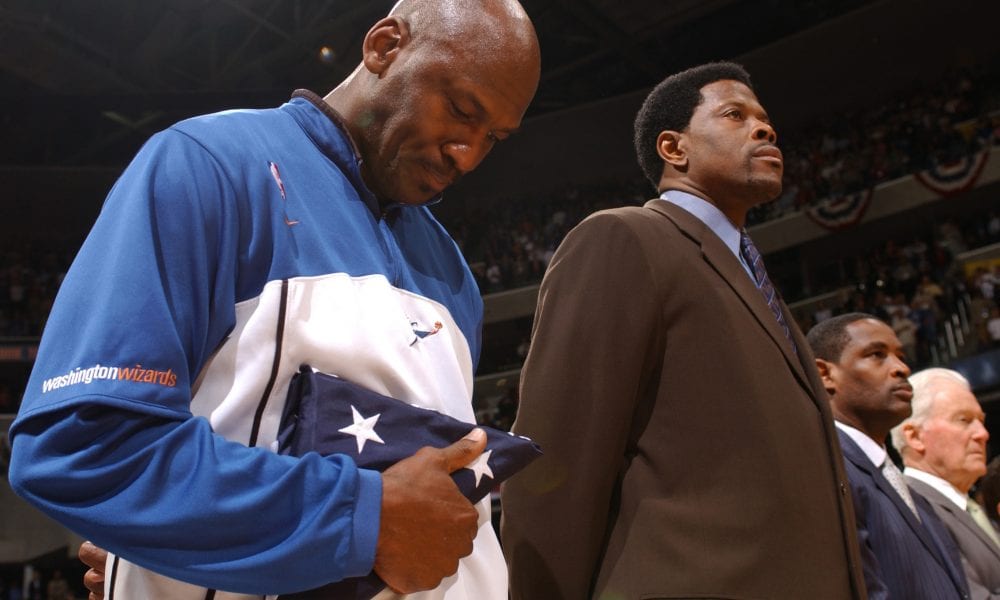 A fleeting diversion from the horrors of 9/11, thanks to MJ

One by one, the family of seven filed silently into the MCI Center, home of the Wizards, looking for temporary relief from life’s challenges, a routine for many who fill the seats at home games. Except there was no game, and this was no ordinary escape from reality.

This was a 9/11 family looking for a diversion, nothing more or less, one that Michael Jordan was willing to give.

This was back in November of 2001, the country still ripped apart by the tragic events of two months earlier, raw wounds that haven’t healed, 10 years later. Historians make a point to say, perhaps with a large degree of truth, that our generation was never more united than in the aftermath of September 11. For once, it seemed, there was no division in race, class, religion or politics. Agony was shared by everyone, with some folks absorbing more than others.

It was this spirit of unity that led two young children, left fatherless from the attacks, to make a simple request:

“Can we meet Michael Jordan?”

For what? An autograph? To watch him play? Well, neither, as it tuned out.

In 2001, Jordan’s career was rolling down the other side of the summit. He had retired three years earlier, for the second and final time, he insisted. But the irresistible pull of the game and a chance at part-ownership of the Wizards was too powerful to keep him in a rocking chair. And so, with the blessing of millions of basketball fans, Jordan reincarnated himself, in a different city, with a different team.

One thing did remain unchanged with Jordan, during this mid-life process. At 37, he was still the biggest star in sports, still cast a wide spell within the masses. He was still Jordan.

He was an athlete who “got it,” meaning, the degree of his fame and how to use it constructively. Certainly, it helped open doors for him, socially and especially commercially; nobody made more endorsement money than Jordan, the ultimate pitchman in sports.

But there was also another side to Jordan. He knew the power of his presence, and how to use that, too. That made Jordan one of the more intriguing sports figures in the immediate aftermath of 9/11.

He decided to donate his entire Wizards salary to the recovery effort and the victims of the attacks. For someone worth hundreds of millions, this wasn’t a tremendous financial sacrifice. It was the sports equivalent of Oprah handing out TVs to her audience. But it was the thought and the gesture, extended during a sensitive time, that counted.

And in the history of professional sports, which is often personified by greed, has anyone else ever willingly surrendered an entire year’s wages for a greater cause? Or any cause?

“It’s my way of giving back and hopefully aiding those in need during a terrible time,” Jordan explained at the time.

Jordan’s other contribution happened purely by chance. By the luck of scheduling, his debut with the Wizards — the season-opener — took place in New York on October 30, 2001. It was a surreal day, from a sports perspective, in a still-suffering city. Just a few miles away, on the same night, the Yankees hosted the 2001 World Series. President Bush threw out the ceremonial first pitch and the American flag flown at the World Trade Center was symbolically shown in Yankee Stadium.

At Madison Square Garden, a sellout crowd greeted Jordan, a player shown respect countless times before by an arena that respects sports royalty, although this was a different kind of reception. The sense of appreciation that night was more than for purely basketball reasons. Jordan was a diversion, and nothing more than that, but a necessary and welcome diversion.

There was nothing he, or any athlete, could do to change the mood. But sports is all about escapism, a simple detour for society to take before returning to the real world. In that context, then, who better to provide a distraction than Jordan?

And so two fatherless kids just wanted to say thanks. They were first led down the stairs, then down the hall and finally around the corner from the Wizards’ locker room. Five minutes passed and then, he appeared, wearing a Nike warm-up suit and a beret, bringing a smile and an embrace.

He introduced himself, as if that was necessary, then made small talk. It took Jordan about three seconds to overwhelm the room. One of Jordan’s gifts is the ability to relate to any audience and any age group, and his skill in this regard, on this day, was in All-Star form. He was gracious, heartwarming and personable.

After a quick family picture, he said his goodbyes, stepped on an elevator and disappeared.

It was just a moment — most likely a fleeting one for Jordan, who has done this sort of thing countless times — yet an everlasting one for everyone else in the room. In the big picture, this was an escape, nothing more.

But it was one that gave my family, especially my niece and nephew, something to talk about. Something else, anyway.