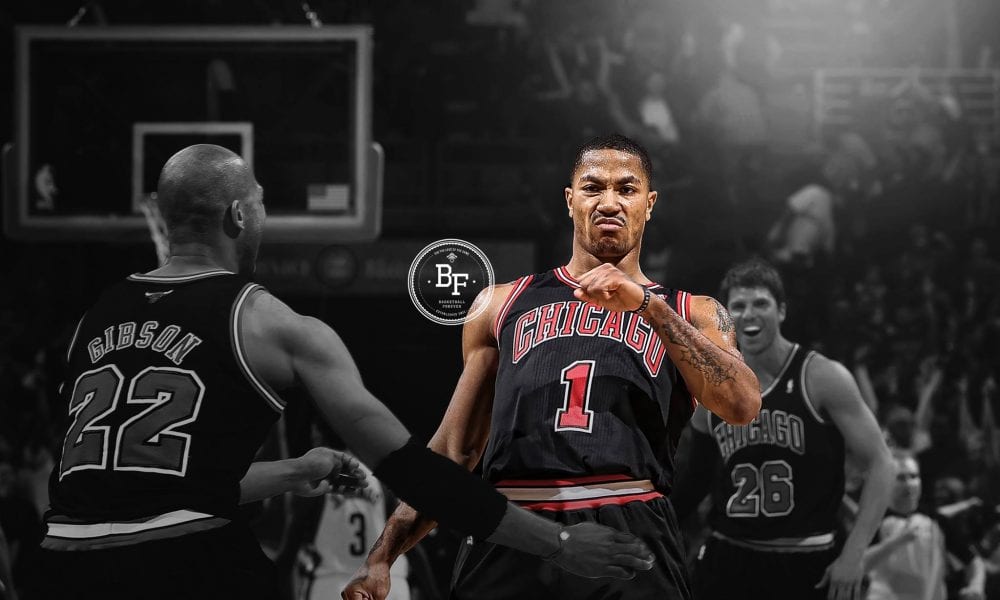 People need to learn to respect Derrick Rose’s 2011 MVP campaign.
He carried a Chicago Bulls team to the first seed at the age of 22 with poise, confidence, and relentless aggression not seen in Chicago since the likes of one Michael Jordan ran the United Center.

Anyone that says LeBron James deserved the 2011 MVP over Rose wasn’t paying attention in 2011 or their memory is fogged over with revisionist history.
DRose didn’t win because the media hated LeBron, and to say that is to show your ignorance of the NBA. Rose earned his MVP.

A 22 year old kid with the weight of a city on his shoulders, the hometown hero who was finally coming into his own dared to ask a question so audacious we laughed at him for it in the moment. Rose asked “Why can’t I be MVP of the league?”

How could an upstart young PG compete for MVP against the likes of LeBron James who had just won 2 straight and looked primed for another one.

In 2010-2011, Chicago was a team led solely by Derrick on offense. Joakim Noah only played 48 games, Boozer missed more time than he’s ever missed in a Bull’s uniform and when they both returned, their injuries lingered (turf toe/plantar fasciitis).

In the 2010-2011 season the Bulls had 62 wins with a rookie head coach. 38 year old Kurt Thomas started and finished games for that team. Ronnie Brewer and Keith Bogans split minutes as the key swingmen on that team. This was before Jimmy Butler, before Pau Gasol, before Noah was considered a DPOY player.
Taj Gibson, Jo and Asik were not yet what they were going to be as NBA players. That year the Bulls were the Derrick Rose show (sometimes featuring an appearance from Luol Deng, who was also playing through a wrist injury).
MVP voting broke down with Rose 1st (1182 pts), Dwight 2nd (643 pts) and Lebron 3rd (522 pts).

Rose was Chicago’s entire source of offense. Despite a dire lack of complementary offensive talent, Derrick made Chicago a top 10 and top 5 offense in separate seasons. In the two seasons afterwards, Chicago was been 23rd and 28th with DRose injured. Equivalent to a lottery team.

On January 20th, 2011 Chicago beat Dallas and Rose joined an elite group. He had a game high 26 PTS to go along with 9 AST and 7 REB. The unusual part of Derrick’s night was that none of his teammates scored in double digits. Over the last decade only two other teams have won a game in which one player scored double digits, the Cavs behind a 30 point Lebron performance in ’08 and the Lakers behind Kobe Bryant’s legendary 62 point outburst in ’05 against the Mavs.

That’s the level of offensive responsibility Rose carried. Rarely is Derrick’s MVP season ever brought up as a season where one player shouldered such an unusually large burden, like Lebron in Cleveland or Kobe Bryant post-Shaq.

That obviously doesn’t mean I’m suggesting Derrick>Lebron/Kobe, I’m also not directly comparing their teams. It’s just funny that the 22 year old who was the sole offensive threat for a 62 win team is somehow seen as an undeserving MVP.
His role for Chicago was Iverson-esque. Remember how we love Allen Iverson for carrying the Sixers to the 2001 Finals against the Lakers with a supporting cast of Eric Snow and aging Mutumbo? We never question his MVP, or his heart.

Anyone who underplays how vital Derrick was to Chicago’s offense doesn’t remember what that team looked like when they needed a bucket, and how Rose was always there to provide the spark to win.

Because if you remember those games when Boozer was out, Noah was out and Luol shot 3-13 while the Bulls still found a way to win? You wouldn’t be nearly as hung up on box score statistics when the guy is carrying his team to wins.

While Derrick was happy to just see a teammate reach double digit scoring, Lebron’s teammate was throwing down impressive numbers in his own right.

Bron had another MVP caliber player on his team and won fewer games than Rose. How does that make him more valuable? Because he had a more aesthetically pleasing stat line? Please.

On top of that fantastic production, Wade serves as a guy who can be a primary ball handler while Lebron plays off ball. Even Chalmers can play PG and take ball handling heat off Lebron.

When Derrick was on the floor he was responsible for over 70% of Chicago’s offense via PTS/AST, despite defenses smothering him as much as possible. The only other reliable ball handler for the Bulls, CJ Watson, played 13 MPG and rarely alongside Rose because of his inability to play the 2.

Derrick’s right hand man was a defensive liability named Carlos Boozer. He missed 23 games that season and when he did play he averaged:

Even Lebron’s 3rd best supporting member played on that level and Miami STILL had a worse record than Chicago.

Derrick didn’t play with another all star that season, Lebron played with TWO! Derrick had less help, a higher usage rate and his team had a better record than Lebron’s.

Voter fatigued played no role in Rose’s MVP selection. Out of 120 possible 1st place votes, Derrick received 113. Four 1st place votes went to Lebron. It was a landslide, a near unanimous selection. Rose had 97.7% of the possible point shares in the 2011 MVP voting.

He received more combined points in the voting than Howard and Lebron combined. To suggest that media favoritism swung the scales THAT HEAVILY is absolutely ridiculous.

To suggest that is to pretend that Derrick Rose didn’t have a historically great season from the PG position. He was the hope for thousands of people in Chicago who hadn’t witnessed greatness like this since MJ.

Do you know how many players in the modern era have totaled 2,000 points and 600 assists in a single season? Only three. Those three are Michael Jordan, Lebron James and Derrick Rose. No one, not even MJ and Bron, have ever done it twice. No one did it at the PG position, no one did it at 6’3″ and no one did it at age 22. Except for Derrick Rose in 2011.

In relation to the 2,000 point/600 assist benchmark, that’s no arbitrary cutoff. Those numbers aren’t carefully selected to make Derrick’s season look cute next to MJ & LBJ. In fact, if you decrease the cutoff significantly to both 2,000 points & 500 assists the list is still absolutely elite. It adds Bird, Wade & Iverson.

If you keep the assist benchmark at 600 and drop points to 1,900 you add only Magic, Gary Payton and Westbrook. 9 players have reached any of those combined thresholds. The only ones not in the Hall of Fame are currently ineligible for induction or still playing.

None of those six names in the lower thresholds cross over to make both cutoffs either, the 2,000/500 or 1,900/600 groups. Making the 2,000/600 club is tremendous, a benchmark for some of the most impressive seasons from a number 1 option in NBA history.

In addition to everything else, don’t forget that Derrick Rose’s team started Keith Bogans and 38 year old Kurt Thomas 37 times that season. Bogans started every single game that year. THAT team was top ten offensively.

So after all of that, yes. There are plenty of reasons Derrick Rose deserved the 2010-2011 MVP award. None of which include voter fatigue, media favoritism or some fictional vendetta against Lebron.

Just take some direct quotes from that 2011 season:

“Derrick’s probably the MVP of this league. I think he has all the tools to be one of the best that played this game…I think so far, in my book, he would be the MVP.”
– Jason Kidd

“He has stepped up and is now one of the best players in the league. I think he is worthy of MVP this year.”
– Steve Nash

“Derrick Rose has taken that team to another level. He’s definitely the MVP, to me, the way he’s been playing… putting pressure on teams and stepping it up, leading his team on the offensive end. He has been spectacular this year.”
– Tyson Chandler

“You look at what he’s done for his team, it’s tough to argue D Rose isn’t the MVP.”
– Kevin Love

“MVP. He’s my MVP.”
– Z-Bo post-game on Rose after the PG scorched Memphis

“I think Derrick has become the best point guard in the NBA, and I think right now he has to be the front-runner for MVP. Derrick Rose has been a tremendous leader. He’s missed his second and third best players the majority of the season, and they have the best record in the Eastern Conference. That’s pretty remarkable.”
– Charles Barkley

“I’m not even being politically correct, normally guys say I’m giving it to LeBron, but honestly I’ll give it to Rose. If he stays on this pace that he’s on right now, he’s got my vote if I was part of the committee.”
– Juwan Howard

“Derrick has had a phenomenal season. Just looking at what he’s done with the team and their record, how improved they are as a team and how much improved he is as a player. I think I would give it to Derrick if I were a voter. He’s playing well, like he’s the best point guard in the league and the best player in the league. He’s the most valuable player if you really think about it. If you take him out of the lineup, there is no telling what you get.”
– Chris Bosh

“I think it’s Derrick Rose, definitely. He’s the leader. What he’s done for that team, with all the injuries they have and for them being first in the Eastern Conference – they’re playing some really good basketball.”
– Lebron James himself when asked by ESPN’s Mike Wallace to weigh in on the MVP race.

Any talk of Derrick Rose winning the award due to media bias is revisionist history. Members of the rival Miami Heat and teammates of fellow MVP hopeful Lebron James were even touting Rose as the favorite for the award, along with the rest of the league and the vast majority of those who cover it.

So let’s not forget what the Rose that grew from the cement roads of Chicago’s south side did during that magical 2011 run. The journey since, with all of the injuries and bumps on the road may have faded our memory and jaded our perceptions, but that doesn’t mean we can’t appreciate a truly amazing MVP season from Chicago’s hometown kid audacious enough to ask why he couldn’t be the MVP of the league.

Not only did he shock the world, he did it in his own way and by his own rules.
How quickly we forget.