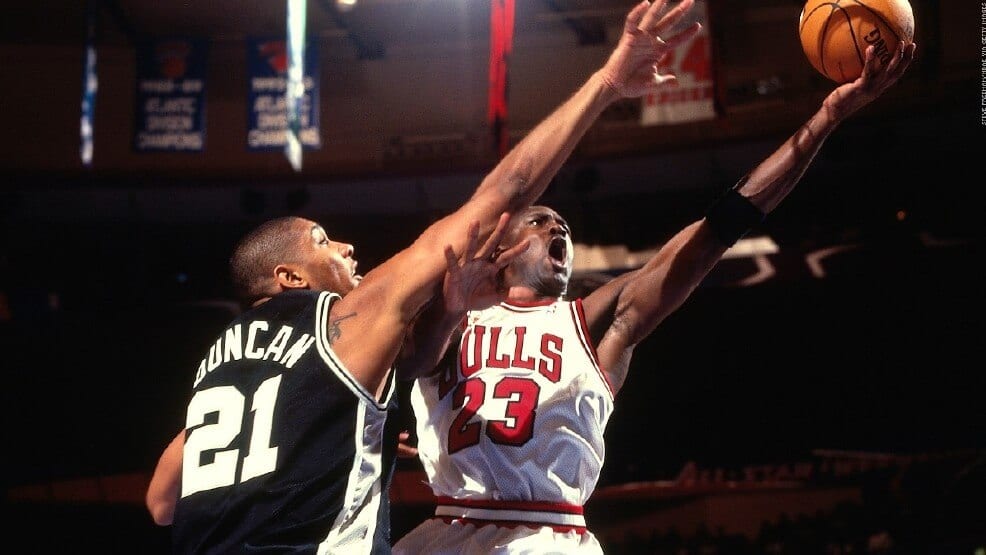 Shaq once said that if someone tells him they think Tim Duncan is the GOAT that he wouldn’t argue with them.

Of course Tim Duncan gets a nod as one of the Top 10 greatest. 5 Championships, 3 Finals MVPs and 2 League MVPs. He’s got the hardware…but is it really fair to put him ahead ofMichael Jordan?

The greatest power forward of all time conducted a rather entertaining interview with Dan Patrick after Duncan’s rookie season in 1998, which revealed how the Big Fundamental (who preferred to be called Merlin) found Michael Jordan to be both unlikable and unimpressive, and Stephon Marbury to be “the bomb.” It’s good stuff. Here are the highlights of the Q&A lifted from Patrick’s book published in 2000 called “Outtakes”:

Duncan: You all (at ESPN). After David Robinson, it’s you all.

Patrick: That’s it. You met Jordan?

Duncan: But Jordan’s Jordan. I’ve always respected him but I’ve never been a fan of his.

Patrick: Why aren’t you a fan of Jordan’s?

Duncan: Because everybody else is.

Patrick: Oh, so you don’t like Michael Jordan because everybody else does.

Patrick: You respect him. You just don’t like him?

Duncan: I’m just somebody that isn’t that impressed by him. There really isn’t anybody in the world I’m impressed with.

Patrick: Give me three young guys you love watching play?

Duncan: Stephon Marbury is the bomb. He is going to be so good. And let’s see. I think Kevin Garnett is going to be really good at some point. But I think the whole. …KG and Kobe are going to be the guys.

Patrick: Do you have to win a title to validate how good you are?

Duncan: Me, I would feel incomplete without it.