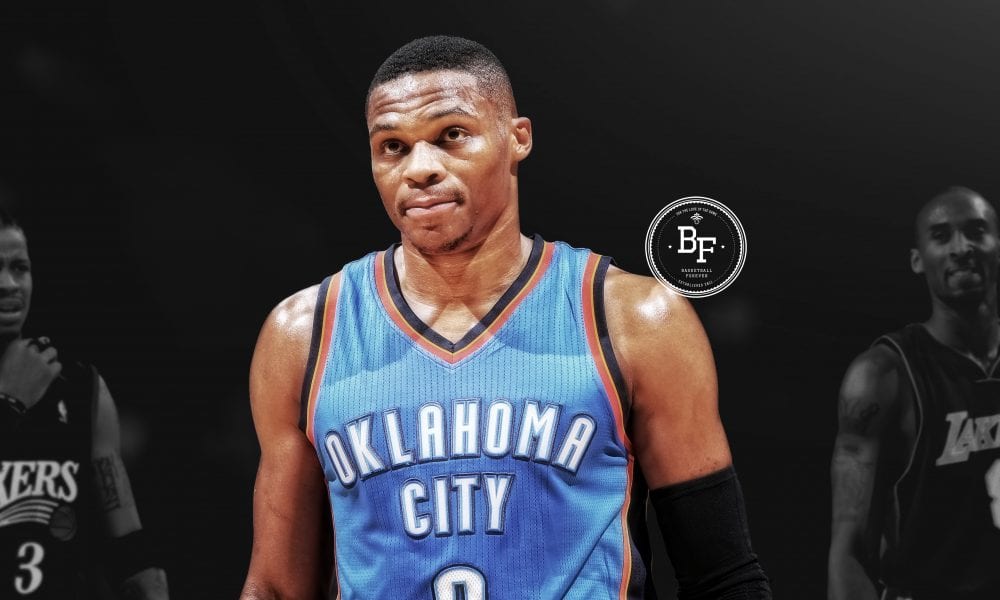 Kevin Durant has been the face of the franchise for the Thunder since they moved from Seattle in 2008. With a career average of 27.3 points per game, he deserves the spotlight in Oklahoma City. But, a fellow teammate is trying to make his name in Oklahoma City as the man of the team, and his name is already pretty familiar, point guard Russell Westbrook.

Westbrook came into the league in 2008 and has played his entire 7 year career for the Thunder. After a 2 year career at UCLA where he averaged 12.7 points per game in his sophomore season, the Seattle Super Sonics took him 4th overall before they moved to Oklahoma City.

The team improved under head coach Scott Brooks and they appeared in 64 playoff games in 5 straight seasons, including a NBA Finals appearance against the Miami Heat. Throughout this time, Russell played outstanding playoff basketball with 24.1 points per game and 6.7 assists per game. None the less, Kevin Durant was still the star of the show.

This changed in the 2014-2015 season when Kevin Durant was sidelined and only played 27 games due to an injured foot that was surgically repaired earlier in his career. This left the Thunder fans and management wondering if Russell Westbrook would be able to lead this team. It didn’t take long for them to find out he was a true leader.

The team was 29-25 and tied for the 8th spot in the Western Conference with the Phoenix Suns.

WITH KEVIN DURANT OFF THE COURT FOR THE REST OF THE SEASON, RUSSELL SHINED UNDER THE SPOTLIGHT OF THE THUNDER. HE HAD 16 GAMES WITH 30+ POINTS IN THOSE LAST 27 GAMES AND ALSO 16 GAMES WITH DOUBLE DIGIT ASSISTS. 9 OF THE 27 GAMES CONSISTED OF TRIPLE DOUBLES.

Despite the play of Russell, the New Orleans Pelicans went 18-10 and had the tiebreaker for the 8th seed in the West. The Thunder finished 9th in the conference with a 45-37 record and didn’t make the playoffs for the first time since Westbrook’s rookie season.

Even before the last 27 games of the season, Westbrook had a year to remember. He broke his career record for points, rebounds, assists, and steals per game. With 11 triple doubles, Westbrook had 28.1 points per game, 8.6 assists per game, 7.3 rebounds per game, and 2.1 steals per game. His plus/minus of +281 showed how important Russell was when he was on the court. He won the scoring title, but the all-star game MVP came in 4th place in the NBA MVP voting behind SF LeBron James, SG James Harden, and PG Stephen Curry.

The 4 time all-star is signed under contract for 2 more seasons. SF Kevin Durant is signed for 1 more year and will hit free agency if a deal with the Thunder is not reached. It will be interesting with the year Russell Westbrook had to see which one they will try to resign, if not both of them.

The Thunder picked guard Cameron Payne with the 14th pick in this year’s draft to try and flourish with Durant and Westbrook on the court together. With Serge Ibaka locking the defense down, the Thunder team looks to be a contender for a title going into the 2015/2016 season, and Las Vegas agrees, putting the team with 17/2 odds at a title this season, the 4th best of any NBA team.