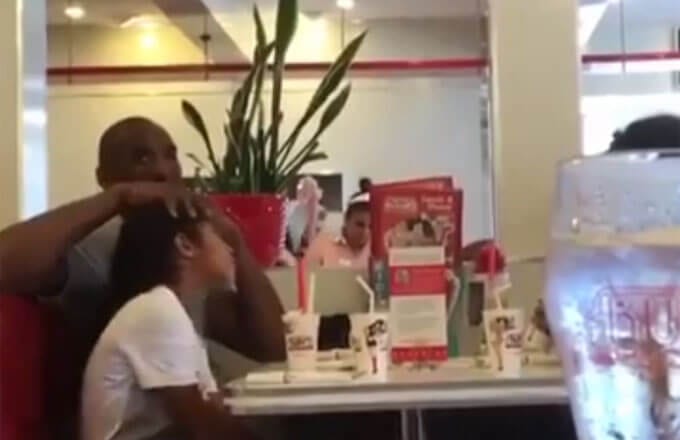 Kobe was trying to enjoy a meal with his family at a Ruby’s Diner recently—it’s unclear when this video was shot but it was posted on reddit on Sunday after someone uploaded it and then deleted from Instagram—when some dude sitting nearby tried to position his smartphone to take a video of Kobe and his family without his permission. Kobe immediately noticed it (the guy spent two decades in the NBA—safe to say his peripheral vision is A1) but rather than telling the guy to shut it off, the savvy veteran simply shot the fan a look that said, “SHUT YOUR PHONE OFF NOW,” without actually saying a word. He even stroked his daughter’s head while he did it! Ruthless.

The person who took the video accompanied it with some back story.

“Like a total dumbass I pull out snapchat and take a picture of Kobe and send it to everyone I know, because fucking Kobe (even though I’ve always been an irrational Kobe hater)… Everyone at the table goes chilllll don’t be so obvious, and I’m like it’s Kobe! Two minutes later this eastern European, Mike Ehrmantraut from breaking bad looking mofo walks up to my table and goes excuse me Kobe Bryant and family would like for you to delete that picture and not take anymore… So I get scared and say okay I’ll delete it.. Then I look over to Kobe’s table and his entire family is looking directly at me trying to vaporize me with this death stare I’ve never seen before and I’m just sitting there half scared half guilt ridden for fucking up someone’s private dinner.

“So now I keep looking over every minute or so to see if they’re over the incident but every time I look over one of the Bryant’s surely has their eyes on me. At this point I’m asking my friend if I should go over and just apologize so we can all move on but they all thought it would do no good. I stayed back but at the end when they were leaving I kinda gestured towards him apologetically and he gave one of those “it’s cool” head nods.”