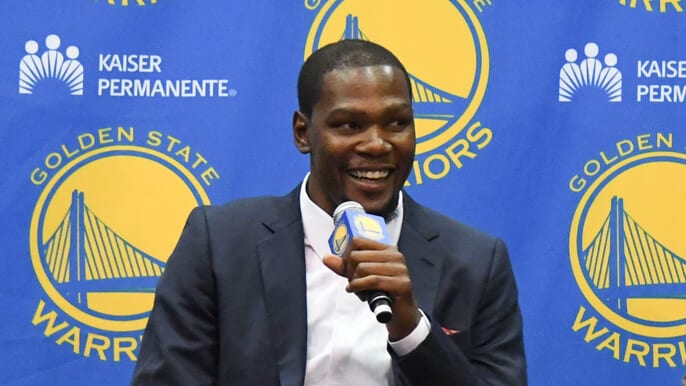 After Kevin Durant decided to sign with the Warriors in early July, Charles Barkley and Reggie Miller were two of his most vocal critics. Barkley made an appearance on ESPN’sMike & Mike and acussed KD of chasing a championship, while Miller wrote a long piece forBleacher Report and ripped KD for leaving a small market in search of a ring. They obviously weren’t the only people upset with KD for abandoning the Thunder, but they were definitely the loudest voices in the room that week thanks to their public platforms.

KD responded to the criticism he received from Barkley and Miller on Monday after a Team USA practice in Las Vegas. While speaking with reporters for about 25 minutes, he admitted that he heard the critical comments they made about him, but he said that he didn’t think they represented how everyone felt about him leaving the Thunder.

“Those are two guys, you know?” he said. “They’ve got a voice in our game, and a lot of people probably felt the same way, but they don’t have a voice so obviously what they say is translated through a megaphone so it feels like everybody else [thinks that]. If Charles Barkley said it, it must be true. If Reggie Miller says it, it must be true. It just feels like it’s bigger than what it is. But for the most part, I got the support around me. I’ve got the family that supports me no matter what, that love me no matter what I do. I could be playing tennis right now, and I could retire from the game of basketball and they’re still going to love me. If I think about that, I’ll be fine.”

During his lengthy media session, KD also talked about his current relationship with Russell Westbrook, what he thinks will happen when he returns to OKC for the first time, his decision not to meet with the Lakers, and more.