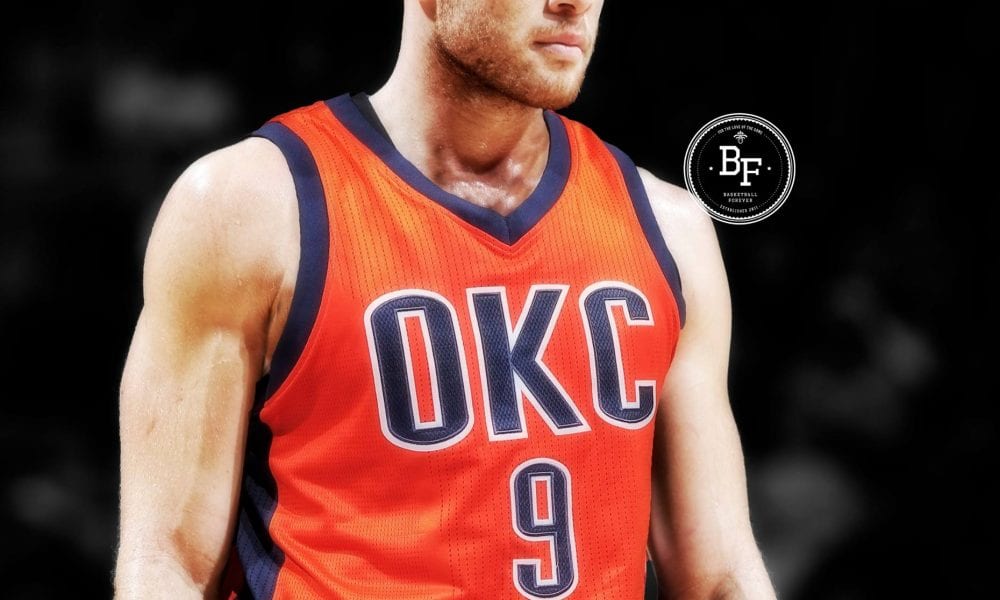 The Blake Griffin trade rumors continue to pile on as the season gets closer, but the Los Angeles Clippers have remained firm with their decision not to trade their All-Star forward despite hearing all these trade proposals. However, Griffin’s leg injury is reportedly still a concern and the team clearly played well without him last season when he was nursing the injury, which means any asset in return could greatly help the Clippers.

There are five teams that have expressed interest in trading for Griffin, including the Oklahoma City Thunder, Chicago Bulls, Toronto Raptors, Boston Celtics, and Philadelphia 76ers. The New York Knicks also have interest, but they have absolutely no assets to construct a trade, which excludes them from this discussion.

Here are five trade scenarios from each of the interested teams.

Russell Westbrook is here to stay in OKC, so giving him another superstar to team up with just seems right. Swapping Enes Kanter and defensive specialist Andre Roberson for Blake Griffin may not do the trick, though, as the Thunder may need to add a first-round pick, or perhaps multiple picks. Nevertheless, this is probably the best Oklahoma City can do in attempts to acquire Griffin.

Just like the Thunder, the Toronto Raptors may need to add multiple picks to make this trade seem plausible. However, Norman Powell has shown signs of his potential and could perhaps become the future two guard in L.A. Terrence Ross, meanwhile, has not improved much over the years but is another young player Doc Rivers could exploit. Lastly, Patrick Patterson could stretch the floor for Chris Paul to comfortably run the offense. Maybe not too promising, but it’s probably the best offer from Toronto that wouldn’t include Jonas Valanciunas.

The Boston Celtics’ first-round pick for next year is extremely valuable since they have the right to swap with the Brooklyn Nets. With that being said, a combination of Amir Johnson and the developing Jae Crowder along with the pick gives the Celtics a good chance of landing Blake Griffin. Crowder would instantly bolster the three position for the Clippers, while Johnson adds more defense and size in the middle.

Taj Gibson and Nikola Mirotic are enticing pieces to offer for Blake Griffin. While Gibson provides defense, rebounding, and high energy, Mirotic supplies floor spacing and outside scoring. Tony Snell becomes a throw-in to make the trade work financially, but he can certainly add perimeter defense and depth. Of course any deal with the Bulls will definitely include Gibson and Mirotic. However, if the Clippers are willing to listen to Chicago’s proposal, they may ask for Doug McDermott instead of Snell.

I know. It looks like the Philadelphia 76ers are giving up a little too much for Blake Griffin. But how would they fix their logjam at the power forward and center positions if they give up a big for a big? They need to give up two big men if they want another big. See what I’m saying? Besides, this would probably be the only way to entice the Clippers in a trade discussion. Anyway, Jahlil Okafor and Nerlens Noel could go to Los Angeles and form an intimidating three-headed monster in the frontline with DeAndre Jordan, as they could have the three players rotate the four and five spots. This is probably best the Clippers could get for Griffin, if the 76ers are willing to move two of their young pieces.