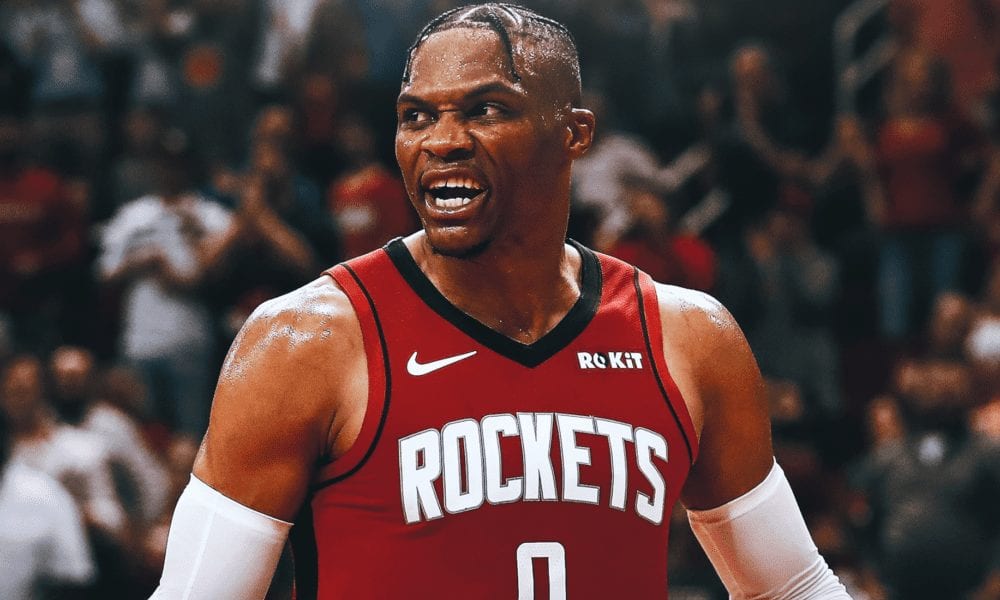 If the Houston Rockets’ season ends prematurely, Russell Westbrook will be a big reason why.

For all the talk about Westbrook finally becoming less Westbrooky alongside Paul George last year, many of his old problems persist, and a lot of that comes back to his shooting.

His handiwork from outside the arc – where he makes just 23.5 percent of his shots – is worse than it’s ever been, with the exception of his sophomore season.

Only two players in the entire league have a worse three-point percentage (among those with at least 75 attempts) and he has the NBA’s worst effective field goal percentage by far (minimum 200 attempts).

That alone has been doing more damage to the Rockets than Daryl Morey’s pro-Hong Kong tweet (OK, not quite).

For much of the season, Westbrook was even taking more threes than many far superior shooters around the league like Tobias Harris and Chris Paul.

Even now, he’s still attempting more triples than teammate PJ Tucker, who is hitting at 38.4 percent from behind the arc, a very good number which jumps to an absurd 49 percent when he’s shooting from his beloved left corner spot.

Russ, on the other hand, can’t even come close to matching that clip right near the rim.

It’s not only the poor percentages that really hurt the Rockets, but also the timing and context of Westbrook’s shots.

He has a nasty habit of taking contested threes at crucial moments – exactly what opposing teams want him to do – and missing them.

Westbrook is not the guy the Rockets want playing hero ball, and yet he insists on jumping into the nearest phone booth and pulling on his cape anyway, with his assist percentage dropping from 33 overall to 26.7 in the clutch.

To make matters worse, Westbrook takes the bait from behind the line with infuriating frequency, and if he hasn’t learned his lesson by 31-years-of-age, it’s unlikely he ever will.

When the Rockets need him most, he rarely has the sense to play to his greatest strength and get to the rim.

Instead, when things get tough, he panics and starts firing off long-range bombs.

Westbrook on the court is like 18-year-old you hitting on the hottest girl at the club: irrational confidence outweighs logical thinking every time.

Meanwhile, someone like Tucker is a far better complimentary piece alongside James Harden, as he takes his shots within the Rockets’ carefully-crafted, Harden-centric system.

There are times when it appears the Rockets would be better off with another PJ Tucker in Westbrook’s place, or just any reliable three and D player.

Case in point: the Rockets have scored 10.1 more points per 100 possessions with Westbrook on the bench than they have with him on the floor.

Houston wouldn’t have to pay his three and D replacement a migraine-inducing $132 million over the next three years.

Sure, the gazelle-like Westbrook is fast and athletic, but he’s also clumsy.

He fumbles the ball far more often than any All-Star level point guard should, averages 5.7 turnovers per 100 possessions (fifth league-wide) and frequently violates one of basketball’s golden rules: do not make passes in mid-air.

All of this becomes especially terrifying in the playoffs, when every possession is crucial.

And yet Westbrook throws them away with reckless abandon anyway.

He can always be relied upon to make a rash decision when cool heads are required to prevail.

But how has focusing on padding the stat sheet worked out for him so far?

His teams have consistently underperformed with first-round exits over the past three seasons.

How is all of this even possible for a former MVP?

Oh, and while we’re on that, Westbrook was named MVP in 2017 over the more deserving Harden almost entirely because of everyone’s triple-double fetish at the time.

The moment the novelty wore off, he wasn’t even seriously considered for the award, despite averaging a triple-double across two more seasons.

His Rockets predecessor Chris Paul may be older and less durable, but at least he is a responsible handler of the basketball.

The smart, steady, and reliable Paul represents everything that Westbrook is not.

Remember, Kevin Durant didn’t want to play with Westbrook and neither did Paul George.

Related Article:  The Case For And Against Letting James Harden Go For Scoring Records In A Blowout